Radical Islamist outfits call for hartal in Kerala on December 17 against Citizenship Act; Jihadi elements likely to unleash terror and replicate the ‘WhatsApp Hartal’ of 2018. 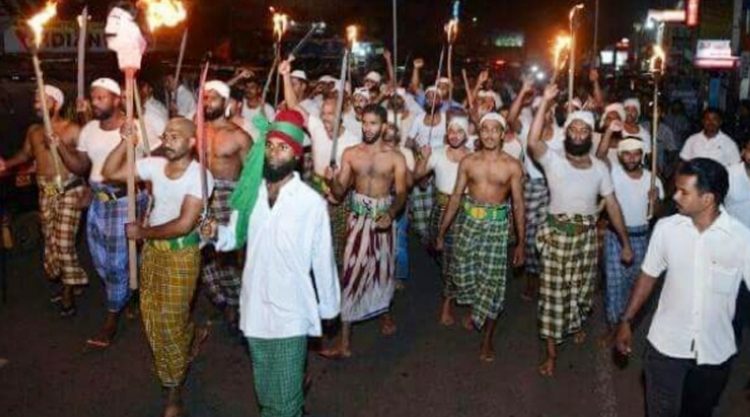 ShareTweetSendTelegram
Various radical Islamist organisations have called for a hartal in Kerala on December 17 against the Citizenship (Amendment) Act. Among the organisations which called for the hartal are Welfare Party of Jamaat-e-Islami, Social Democratic Party of India (SDPI) of Popular Front of India and Dalit Human Rights Movement (DHRM). More Islamic and Left-wing groups are expected to declare their support to the hartal in the coming days.
Along with Islamic extremists, some Urban Naxal groups have also extended support to the hartal against the Bill.
President Ram Nath Kovind gave his assent to the Citizenship (Amendment) Bill, 2019, turning it into an Act after the Lok Sabha and Rajya Sabha passed the bill according to which, members of persecuted minority communities of Pakistan, Bangladesh and Afghanistan will not be treated as illegal immigrants but given Indian citizenship.

According to reports, “Certain forums in Kerala have claimed in a statement that both the CAB and NRC are divisive and are against the fundamental right of equality granted by the Constitution. Dubbing CAB the ‘death of Constitution’ they said there is a need for strong protest against the move to make a section of people stateless.”
Meanwhile, on Facebook, the members of various Jihadi groups gave an open calls for violence against Hindus. In Facebook posts, communally charged Islamists threatened that they would exterminate all Hindus from Kerala if the Citizenship Act is implemented in the state. Some of them also wanted to remind the Union Government about the Malabar Hindu Genocide of 1921 in which more than 10,000 Hindus were massacred by Jihadis.
As per the social media comments posted by Islamists, the hartal could turn violent in some areas in Northern Kerala. Against this backdrop, the concerns have been already raised over the security of the Sabarimala devotees, especially those who are from outside the state, on the hartal day.

However, the CPM-led LDF government in Kerala has succumbed to the pressure of the Islamic fundamentalists in the issue and announced that it would not implement the act in the state. Kerala Chief Minister Pinarayi Vijayan on Thursday said that “an anti-constitutional law will have no place” in his state.
It may be recalled that an unprecedented act of terror unleashed by various Jihadi outfits, many parts of Kerala came to a standstill in a hoax Hartal called through social media on April 16, last year. Without any prior notice, the radicalised Muslim youth took to the streets in protest against the rape and murder of the 8-year-old girl in Kathua, Jammu and Kashmir. In a spate of violent attacks throughout the state, particularly in Northern Kerala and Malappuram, the rioters vandalised Hindu places of worship and attacked the RSS shakhas. The violent Muslim mobs widely targeted the shops owned by Hindus and set ablaze several public transport vehicles and vandalised police vehicles. In connection with the incident, the state police had booked scores of Islamic rioters including the workers of the Popular Front of India, Jamaat-e-Islami, and the Muslim League.
Tags: #Urban Naxal#radical Islamist organisations#Citizenship (Amendment) Act#Harthal
ShareTweetSendShareShare