The Seer who Broke Barriers. 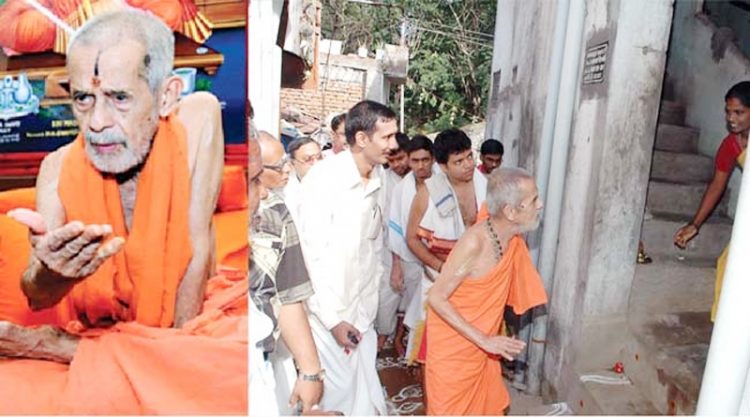 Pejawar Swami Shri Vishwesha Teertha was a spiritual connoisseur and a pioneer of social awareness. He constantly strived to eliminate untouchability from society. He never missed any Dharma Sansad called by the VHP and guided Shri Ram Janmabhoomi Movement since day one. He was closely associated with the VHP since its inception in 1964

A great tree has fallen inevitably. But before it fell, it has created innumerable saplings of the same kind. And those are bound to flourish and spread the fragrance of peace and harmony in the entire Vishwa.
Sri Sri Sri Vishwesha Teertha Swamiji was a Vamana Moorthi Thrivikrama. He had a Vamana like small stature, taking one small meal a day (no meals on Ekadashi and other vrata dina), keeping sleep to bare minimum hours. However, his feats are entire world encompassing like Thrivikrama.

The journey of his life

At an early age of 7 years, he took up Sanyasa as per his own wishes. He was anointed the pontiff of Pejawara Math, one of the 8 Mathas established by Madhwacharya, the 12th-century Dwaitha Philosopher and a Vaishnava saint.
The Swamiji undertook intense Vedic studies under the tutelage of Sri Sri Vidyamanya Thirtha Swamiji. The Guru recognised the immense potential, deep devotion, thirst for knowledge in his Shishya in the early years. He became one of the greatest Dwaitha Scholar. He attended many of the philosophical debates, Vakyartha seminars and won the hearts of many scholars at an early age.
The Swamiji established Akhil Bharath Madhwa Maha Mandala (ABMM) to bring unity amongst the Madhwa philosophy followers. Under this banner, he established numerous Krishna Mathas and hostels in various towns to help the students from a rural, poor background. In one such Mysore Madhwa hostel, I took shelter and completed my graduation at very minimal expenses.
He established Poorna Prajna Vidhya Peetha in South Bangalore. Over the six decades of its establishment, many scholars have graduated from it to become deans and heads of several institutions and universities. The institute has inspired the initiation of many research institutes, publications, colleges, and universities. One such is Karnataka Samskrit University.
He played a key role in establishing the Vishwa Hindu Parishad bringing unity and purpose amongst all the Hindu institutions, Mathas all over India and the world. Setting up an example of a true sanyasi, the Swamiji served the society in common apart from his deep spiritual endeavour.

He always believed inequality. As early as the 1970s he made waves by entering Harijan colonies in Bangalore. Many of his followers were only stunned and moved the idea of censoring him from Udupi Krishna Matha. Many mutts and traditional Swamiji’s used it as an opportunity to oppose him. He confided in his Guru Sri Sri Vidyamanya Thirtharu whether he was doing anything wrong. Though he received his blessings, he went into his own spiritual discovery only to restart his Harijan connects in 2010.
By then much of the social awakening had happened in the society and the society received his revolutionary leadership in reforms with both arms. So much so, that recently when some misguided Dalits wanted to create a ruckus by entering into Brahmins only dining room in Udupi, his own followers from the same communities made a human chain to protect him and the Mathas traditions. The love and affection of Swamiji had won over the millions from the oppressed classes to stand firmly behind him.
When Naxalism hit the forests of the Western Ghats, he felt for the gullible living there. He entered fearlessly around the dangerous Naxal affected areas. He moved men and money to establish electrical connections to several villages to light up their lives. This united the poor, gave them confidence, moved the government to take notice and provide safety and security and courage to fight against the nefarious designs of the Naxals. Without the local support, the Naxalism has almost died down in these forest areas now.
He was a firm believer that Gauseva is Loksewa. By his inspiration, the junior pontiff of Pejwar mutt Sri Vishwaprasanna Thirtha has been running the Neelavara Goshala for several years now. There are around 1000+ desi cows and bulls living there.
He was a lone warrior against the mining in Kunjarugiri hills near Pajaka Kshetra, the birthplace of Madhwacharya. He moved the government to take notice of the ill effects of the mining in that area to the heritage temples and houses around that area. The Government ultimately withdrew the mining licenses heeding to his call.
Keeping in view the Hindus going on regular pilgrimage, he established many choultries for their convenience in all the major pilgrimage centres. These centres also act as centres for conducting religious rituals, yajna, etc., at the auspicious locations. The centre coordinators are graduates from Vidyapeethas established by him. I have personally interacted with them and found them excelling in not only religious rituals, spiritual discourses but good in administration and management of these centres. And sometimes doubling (tripling) up as even head cooks!!

When he called on the Muslim community to break their fast during Ramzan in the dining hall of Krishna matha, there was a huge uproar against it by the Hindus. However, he stood his ground and offered the Krishna Prasada to them. There are several Muslim business establishments benefited by Udupi Matha, have given several grants to the Matha during his Paryaya. He had three Muslim drivers. And they revered him for his simplicity and showering love and affection on them.
On the dais of VHP’s Dharma Sansad in Udupi, he called upon all the Bharatiyas to construct a grand Shri Ram Temple in Ayodhya. Thus giving a momentum across Bharat to Shri Ram Janmabhoomi movement. He was there at the site offering Pooja to Shri Ram Lalla when the disputed structure came down.
When the Christian missionaries started conversions in the guise of religious propagation on the steps to Tirumala, the Swamiji started a movement to protect the hills from the missionaries. He fought against the nefarious designs of the missionaries. The Rajasekhar Reddy government was corrupt and had allowed the destruction of the Hindu faith at the very abode of Lord Venkateswara. The Swamiji organised the Hindu society to fight against the adversaries to protect the Dharma.
He called upon the Government of Karnataka to drop the controversial Tippu Jayanti. He was a Sanyasi who lived for society and was ready to raise against the adharma in society. Thus, the Swamiji not only called for the renaissance of Hindutva but also waged a war against the destructors of our culture and tradition.
During all these movements and organising Hindus to fight the evils of the society, he had gathered a lot of enemies amongst the most powerful people of politics and society. However, that didn’t deter him. He had such an impeccable character that nobody could raise any doubts about his intentions for the revival of our Sanatan Dharma.

Sri Sri Sri Vishwesha Teertha Swamiji is the only one to have done five Paryayas in the 5 century-old traditions of Udupi Krishna Matha. The 8 mutts of Udupi have established a tradition of the rooster of 2 years to each mutt to do the daily Sampoorna Sri Krishna Pooja. This is called Krishna Matha Paryaya. Hence, each Matha gets its 2-year turn after 14 years.
By this record, he has also set record of doing the highest number of Mahapooja to Udupi Sri Krishna. He has done approximately 3655 Mahapoojas. He has set a record of doing Chaturmasya Vratha amongst the Madhwa Yathis of this century. This year Chaturmasya Vrata was his 82nd.
He is the only sanyasi who has attended all the VHP Dharma Sansads so far since its establishment. He never clamoured for any honours and recognitions. He simply toiled his frail body with a strong mind for the cause of humanity. Many Pranams to him. May his soul live in the hearts of many millions in the coming years to guide us in his path of protecting and propagating our Hindu Dharma.