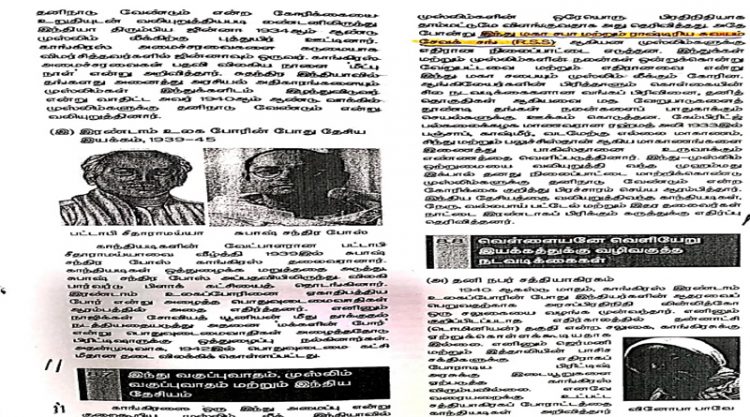 Madras Highcourt has directed the State Government to remove the objectionable portion about RSS in the 10th standard social science textbook. A Petition has been filed by Mr. P.Chandrasekaran, Secretary RSS Chennai In WP.No.639 of 2020, against the content In 10th standard social science textbook stating “RSS took a pronounce anti-Muslim stand” under the caption Hindu communalism and it was published in both Tamil and English version of the textbook published by Department of school education. The principal secretary government of Tamil Nadu, the director Department of school education, the managing director TN Textbook and education service Corporation and the director SCERT were made parties to this petition.

The matter came up for hearing before Honourable justice Mr. PD Adikesavalu in court all number 27, the counsel of the petitioner’s counsel Dr. G. Babu has argued that the content appeared as if in the struggle for freedom, RSS took an anti-Muslim stance and same had resulted in Partition of the country. This is a completely false statement and incorrect view of the fact that RSS never took any stand against any religion and it vehemently opposed the decision of country on the basis of religion.
The content in the textbooks gives the wrong opinion in the minds of the school students about RSS and the impression has been created as if that the RSS is an organisation which is working against Muslims which is totally false. The respondent, in turn, submitted that the contents would be removed from the textbook such process already underway, but the lordship have verified original textbook which was produced by the petitioner counsel after seeing the contents his lordship directed the state Govt to remove the object able portion which are highlighted in the Writ petition which is existing content in the page No 46 in the English version and page No.50 in the Tamil version under caption of 8.7 of the part –II of the Social science book which has been printed for the free supply by the Govt of Tamilnadu by alternative method, to that effect the court directed the respondents counsel to file an affidavit to how the content can be removed in the existing textbooks and posted the matter to 22.01.2020 for compliance.
ShareTweetSendShareShare