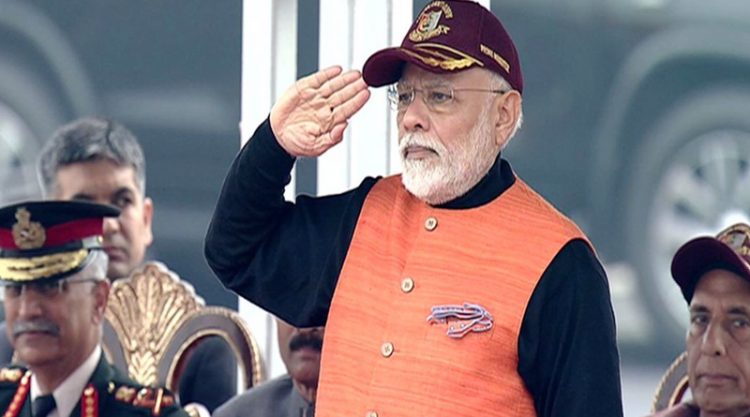 Prime Minister Narendra Modi attended the National Cadet Corps Rally in Delhi. At the rally, Prime Minister inspected the Guard of Honour and reviewed the March Past by the various NCC contingents and also from Cadets from other friendly and neighbouring countries.

Speaking on the development efforts of the North East, the Prime Minister said that earlier this region was neglected and battling extremism, innocents died in the violence. He added that unprecedented plans for the development of the North East were initiated by this Government on the one hand, and on the other hand dialogue was initiated with all stakeholders with a very open mind and an open heart. The Bodo agreement is the result of this. This is the thinking of young India.

After the Bru – Reang Agreement between the Mizoram and Tripura, the 23-year-old problem involving the Bru tribes has been resolved. This is the thinking of young India. We are advancing the country by taking everyone along, developing everyone, gaining everyone’s trust.

Prime Minister said that it is necessary for the youth of the country, to know the truth about the Citizenship Amendment Act. Since independence, independent India has promised Hindus-Sikhs and other minorities in Pakistan, Bangladesh, Afghanistan that they can come to India if they need to. He promised that India stands with them. He added that this was also the wish of Gandhiji, this was also the spirit of the Nehru-Liaquat agreement in 1950. “In these countries, people who were tortured because of their faith, it is the responsibility of India to give them asylum, give them citizenship of India. But thousands of such people were turned away.”, the PM said. “In order to stop the historical injustice done to such people, today our government has brought Citizenship Amendment Act, giving citizenship of India to such people to fulfill the old promise of India,” the PM said.

Prime Minister said that many people left India at the time of Partition but asserted their rights over the properties here. Despite the right of India on these assets worth millions of crores, Enemy Property was kept in abeyance for decades, he added. He said that those who opposed the Enemy Property law are the same people who have now come out to oppose the Citizenship Amendment Act.

Prime Minister mentioned that there was no concrete initiative to resolve the dispute in the border areas of India and Bangladesh. He said that the infiltration will not stop till the border remains disputed. Keep the dispute unresolved, gives the intruders an open path, keep running your politics.

He said that this government settled the border dispute with Bangladesh by listening to each other, understanding each other and finding a solution in which both countries agreed. He was satisfied that not only the border dispute has been resolved today, but also the relations between India and Bangladesh are at a historical high today and both the countries are fighting poverty together.

Prime Minister said that Partition took Gurudwara Kartarpur Sahib away from us, making it a part of Pakistan. Kartarpur was the land of Guru Nanak. The faith of crores of countrymen was associated with that holy place, he added. He said that for decades, Sikh devotees were waiting for the opportunity to reach Kartarpur easily, and to have a glimpse of Guru Bhoomi. This was achieved by constructing the Kartarpur corridor by this Government.