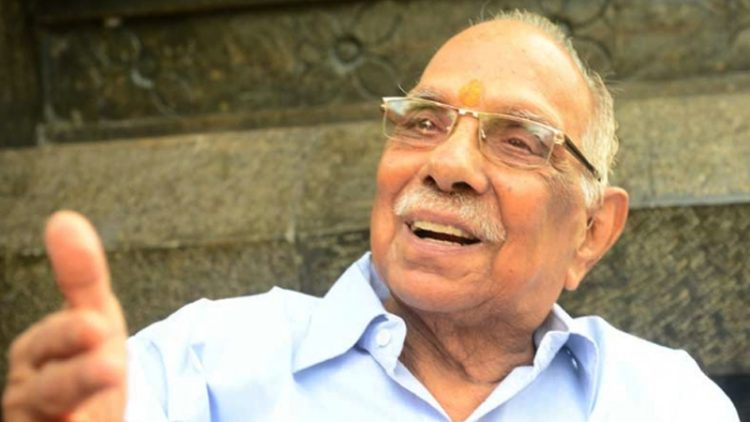 ShareTweetSendTelegram
Renowned social thinker, reformer, writer and veteran RSS Pracharak Shri P Parameswaran passed away in the early hours of Sunday. He was 93 years old. He was undergoing Ayurvedic treatment at Ottappalam in Palakkad district, Kerala.
Born in 1927 in Muhamma, Alappuzha district, he graduated from University College, Thiruvananthapuram with distinctions in BA (Hons.) in History. He joined the RSS during his student days.
Fondly called Parameswar ji, he was national general secretary and vice president of the erstwhile Bharatiya Jana Sanh and the founder-director of the Bharatheeya Vichara Kendram.
Parameswar ji had worked with towering leaders like Deendayal Upadhyaya, Atal Bihari Vajpayee, and L K Advani when he was active in the Jana Sangh. He was honored with Padma Vibhushan, the country’s second-highest civilian award in 2018 and Padma Shri in 2004.
Parameswaranji was a prolific writer, poet, and researcher who is best known for his works on Sree Narayana Guru, analysis of Kerala’s spiritual renaissance movement and comparative study on Vivekananda and Marx.
His body has been brought to the RSS headquarters in Kochi on Sunday morning and will be brought to Thiruvananthapuram by evening for people to pay their last respects. The cremation will be held in Muhamma tomorrow.

Prime Minister Narendra Modi paid homage to Shri P Parameswaran. “Shri P Parameswaran was a proud and dedicated son of Bharat Mata. His was a life devoted to India’s cultural awakening, spiritual regeneration and serving the poorest of the poor. Parameswaran Ji’s thoughts were prolific and his writings were outstanding. He was indomitable,” the Prime Minister tweeted.
“An institution builder, Parameswaran Ji nurtured eminent institutions such as the Bharatheeya Vichara Kendram, Vivekananda Kendra and others. I am fortunate to have interacted with him many times. He was a towering intellectual. Anguished by his demise. Om Shanti,” Shri Narendra Modi said.
Childhood and Education
A Scholar, great thinker and social worker, Sri.P.Parameswaran was born in 1927 at Cherthala in Alappuzha district of Kerala State. He graduated from University College, Thiruvananthapuram with distinctions in BA (Hons.) in History.
Public Life
A poet, writer and excellent orator from his college days, Sri Parameswaran entered the realm of social work as a pracharak of Rashtriya Swayamsevak Sangh. Later in 1957, he was entrusted with the task of building up the Bharatheeya Jan Sangh in Kerala as its State Organizing Secretary. In 1968, he became the All India General Secretary and later Vice-President of the Jana Sangh. He was imprisoned during the period of emergency in 1975/77.
In 1977, Sri Parameswaran moved from Politics to the sphere of social thought and development. He was Director of the Deendayal Research Institute at New Delhi for four years. In 1982, he came back to his home state and gave shape to a new organization; Bharatheeya Vichara Kendram aimed at national reconstruction through study and research. It has its headquarters in Thiruvananthapuram and has units all over the state. Sri. P. Parameswaran is currently the Director of Bharatheeya Vichara Kendram. It functions also as a Centre for moulding public opinion in favour of national needs and concerns. He has also been associated with the Vivekananda Rock Memorial and Vivekananda Kendra, Kanyakumari, and has served in various capacities in the governing body of the Kendra. He is currently all India President of Vivekananda Kendra.
Sri. P. Parameswaran led a life wholly dedicated to social service, especially as a social philosopher and thinker. From early childhood, he had a great inclination towards the study of Hinduism. He was intimately connected with most of the Hindu social and cultural organizations. He took initiation from Sri. Ramakrishna Mission and was a close associate and disciple of Swami Agamananda social reformer and founder of Advaita Ashram at Kalady, the birthplace of Adi Sankara. Well-informed in the philosophy of Vedas, Upanishads, and Gita he followed in detail the thoughts and writings of Western thinkers like Karl Marx and Arnold Toynbee and the Indian seers like Swami Vivekananda, Sri. Aurobindo, Mahatma Gandhi and Deendayal Upadhyaya.
He has been ceaselessly writing articles and books on social, cultural and religious themes. He is also a gifted orator, with a great command of words and a greater depth of insight. He has delivered lectures all over the country on national issues. He participated in the Centenary celebrations of Swami Vivekananda`s address at the World Parliament of Religions held at Chicago in 1993.
Sri. P. Parameswaran was honoured with Padma Vibhushan, the country’s second-highest civilian award in 2018 and Padma Shri in 2004.
He was appointed as the member of the Court (Senate) of Jawaharlal Nehru University, New Delhi in 2000.

He was awarded the Bhaiji Hanuman Prasad Poddar Award instituted by Bada Bazaar Library of Calcutta in 1997, in recognition of this effort in reaching the lofty principles of Hinduism to the common man.

Moreover, he is a winner of the Kerala Sahitya Akademi Award for his book titled “Disa Bhotathinte Darshanam”.
Social Thoughts
In the eighties, he took the initiative to call for an end to the mindless political violence in Kerala and put forward the idea of Ideological debate in the place of armed conflict. This was widely welcomed by the wise men of Kerala and set the trend to end the bitter violence. He is an acclaimed scholar and advocate of the vision of Swami Vivekananda and Sri Aurobindo. His biography of Sri Narayana Guru is one of the well-researched studies on the life and teaching of the reformer saint of Kerala.
In 1998, as an answer to the rising crime rate, delinquency and other social evils in Kerala, Sri. Parameswaran proposed observation of ‘a Bhagavad Gita decade’. Popularising the Bhagavad-Gita as a comprehensive life science was his solution to the social problems of Kerala and the whole of India. This suggestion was well received by other social and religious leaders and organizations. By a joint effort of several social and religious organizations, a massive movement for spreading Gita awareness has started in Kerala. Eminent personalities like Dr Padma Subramaniam, Justice Sukumaran etc. attended the function, which was formally inaugurated by Sri. Ananda Kumar, Union Minister for Culture, Youth Affairs and Sports. The International Seminar on Bhagavad-Gita Gita and Modern Problems held at Thiruvananthapuram from 7th to 4th December 2000, in which 1500 youths, scholars and saints from all over India and abroad including Dr Murali Manohar Joshi, Union HRD Minister and his Holiness The Dalai Lama participated, was organized under the guidance of Sri. P.Parameswaran. It has now become a movement with the active participation of the youth from the universities and also from every walk of life
Works
Shri Parameshwaran was the Chief Editor of journals‑ ‘Kesari’, ‘Manthan’, ‘Yuva Bharathy’ and the quarterly Vivekananda Kendra Patrika and ‘Pragati’ Quarterly Research Journal. He has authored several books on Indian philosophy and society:
Sri Narayana Guru the Prophet of Renaissance.
Sri Aravindan Bhaviyude Darsanikan.
Vishwa Vijayi Vivekanandan.
Marx and Vivekananda.
From Marx to Maharshi.
Bhagavad Gita – Vision of a New World Order.
Beyond All Isms to Humanism.
Heart Beats of a Hindu Nation (Compilation of selected editorials in Yuva Bharathy).
Yajna Prasadam (Selected Poems).
Disabodhathinate Darshanam (Selected Essays in Malayalam).
Bhagavad-Gita The Nectar of Immortality (Collection of Essays on Gita).
Marunna Samoohavum Maratha Mulyangalum.
Gita’s Vision Of An Ideal Society
Udharedathmanathmanam
Makarajyotis(A brief study of Swami Vivekananda in Malayalam)
Darshanasamvadam
Swanthantra Bharatham-Gatiyum Niyathiyum
Hindudarmavum Indian Communisavum
Vivekanandanum Prabhudha Keralavum (Edited)
Hindutva Ideology – Unique and Universal
Heart Beats of Hindu Nation (3 volumes)
ShareTweetSendShareShare