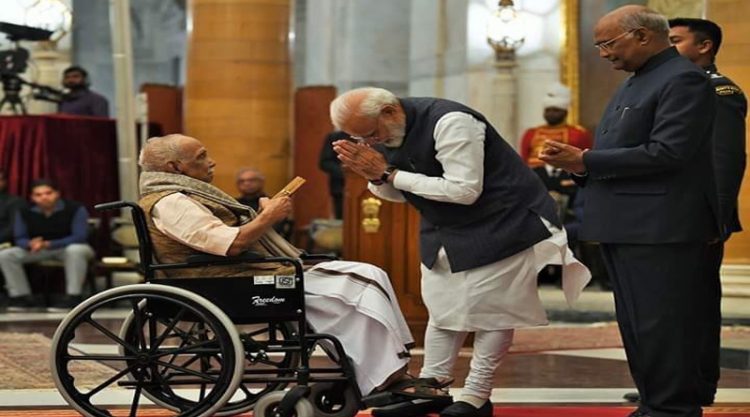 ShareTweetSendTelegram
Vice President M Venkaiah Naidu, Prime Minister Narendra Modi, Kerala Governor Arif Mohammed Khan, Chief Minister Pinarayi Vijayan, and Union Home Minister Amit Shah are among the galaxy of leaders who condoled the demise of Rashtra Rishi Parameswaran Ji, who passed away in the early hours of Sunday. Condoling his death, Vice President M Venkaiah Naidu said, “Deeply saddened by the demise of Shri Parameswaran ji, a prolific writer, researcher and founder-director of Bharatiya Vichara Kendram. He was an embodiment of Indian thought and philosophy.
“His immense contribution to society through Vivekananda Kendram and Bharateeya Vichara Kendram was invaluable. He is a great son of the soil whose ideas continue to inspire and guide the nation. My heartfelt condolences to the bereaved family members,” he added.
Prime Minister Narendra Modi described the late leader as a “proud and dedicated son of Bharat Mata” who devoted his life to “India’s cultural awakening”. “Shri P Parameswaran was a proud and dedicated son of Bharat Mata. His was a life devoted to India’s cultural awakening, spiritual regeneration and serving the poorest of the poor. Parameswaran Ji’s thoughts were prolific and his writings were outstanding. He was indomitable!” Narendra Modi tweeted.
Kerala Governor Arif Mohammed Khan in a tweet said: “Deeply grieved by the sad demise of P Parameswar-Ji, Director, Bharatiya VicharaKendram. With endearing politeness and accomplished scholarship, he inspired society through insightful speeches & writings on Indian thought. My heartfelt condolences.”
Union Home Minister Shri Amit Shah in a tweet said: “Saddened to learn about the demise of senior Pracharak and Padma Vibhushan P. Parameswaran ji. He was a great social reformer and a true nationalist who devoted his entire life in the service of nation & humanity. His passing away is an irreparable loss to the society. Om Shanti.” Noting that Parameswaran’s writings and thoughts on social, cultural, religious and national issues were unparalleled, he said the late leader’s contribution in restoring democracy during the emergency will always be remembered.

Kerala Chief Minister, Pinarayi Vijayan, along with three of his Cabinet Ministers, reached Ayankali Hall, where the mortal remains of P. Parameshwaran ji is kept for the public to pay their last respects. Opposition leader, Ramesh Chennithala, also reached the Ayankali Hall to pay homage.

Condoling the demise of Parameswaran, Kerala Chief Minister Vijayan, paid his respects and said that P. Parameshwaran ji was a profound scholar whose life equaled that of a Rishi- an ideologue who dedicated his life to the ideology he believed in.

He was accompanied by Cabinet Ministers, A. K. Balan, Kadakampally Surendran and Kadannappalli Ramachandran.

People from all walks of life are flocking to Ayankali Hall to get a final glimpse of P. Parameshwaran and to give their respects. Cultural, political and social leaders are also arriving at the hall in huge numbers.

P. Parameshwaran’s mortal remains will be taken to his ancestral home in Muhamma, Alappuzha, where the final rites will be done.