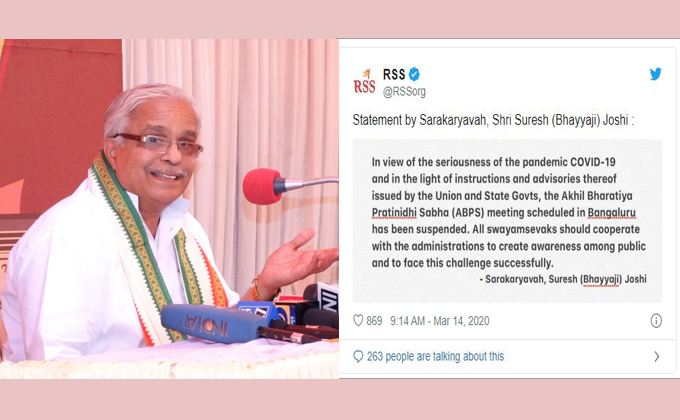 The annual Akhil Bhartiya Pratinidhi Sabha (ABPS) of RSS that was to be held from 15th in Bengaluru has been called off. RSS Sarkaryavaha Suresh Bhaiyyaji Joshi in a statement issued to the media said that in view of the seriousness of the pandemic COVID19 and in light of the instructions and advisories issued by the Union and State governments, the ABPS has been suspended. Bhaiyyaji Joshi also appealed all Swayamsevals to join the efforts to create awareness among the public and to face the challenge successfully.

The Karnataka government too had issued a directive to cancel all large gatherings, functions and events in view of the COVID19 threat. Malls and cinema halls too have been asked to stay shut for a week in Bengaluru.

he call to suspend the ABPS has been taken despite taking all measures to screen the participants at the ABPS venue.  RSS sources say that Swayamsevaks will now actively be involved in spreading awareness about COVID19 in their respective areas of work and help the country counter the threat.