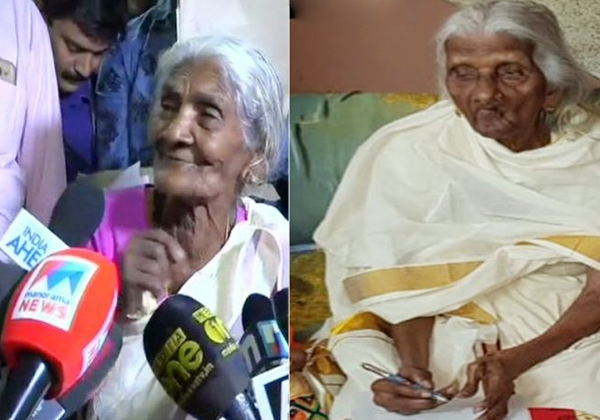 New Delhi: The two proud old mothers of Kerala will be recognised with an honour by the nation. Bhageerathi Amma and Karthiyani Amma who made headlines for passing the equivalency exam in Kerala has been chosen for the ‘Nari Shakti Puraskar-2019’.

Bhageerathi Amma (105) had attempted the class 4 equivalency literacy exam and was acknowledged by the Prime Minister Narendra Modi on his radio programme ‘Mann Ki Baat’.

Karthiyani Amma (98), surprised everyone by topping the literacy examination conducted by KSLMA by scoring 98 out of 100 in 2018, was selected as the ‘Commonwealth of Learning Goodwill Ambassador’.

Both of them will be awarded the ‘Nari Shakti Puraskar 2019’ by President Ram Nath Kovind in New Delhi on March 8, which also happens to be International Women’s Day.

The award is touted as the government of India’s highest civilian honour for women awarded by the Ministry of Women and Child Development.