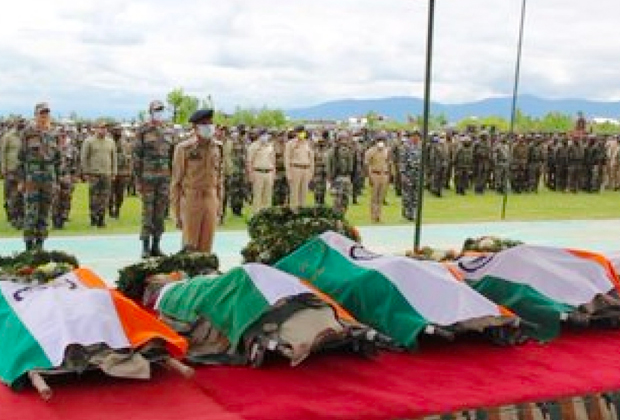 New Delhi: A Colonel, Major and two Jawans of the Indian Army along with a sub-inspector of J&K police were martyred in an encounter in Jammu and Kashmir’s Handwara on Sunday. The soldiers were on a mission to save the civilians who were taken hostages in a house by terrorists. Two terrorists were also killed in the encounter.

“Tributes to our courageous soldiers and security personnel martyred in Handwara. Their valour and sacrifice will never be forgotten. They served the nation with utmost dedication and worked tirelessly to protect our citizens. Condolences to their families and friends,” Prime Minister Narendra Modi said in a tweet.

Defence Minister Rajnath Singh also condoled the deaths on Twitter. “The loss of our soldiers and security personnel in Handwara (J&K) is deeply disturbing and painful. They showed exemplary courage in their fight against the terrorists and made supreme sacrifice while serving the country. We will never forget their bravery and sacrifice,” he wrote.

According to reports, the soldiers had gone to rescue civilians who were taken in as hostages by three terrorists. Those martyred included two officers – Col Ashutosh Sharma, Major Anuj Sood, two Army jawans and J&K Police sub-inspector Shakeel Qazi.

“However, during the process, the team was subjected to heavy volume of fire by the terrorists. In the ensuing fire fight, two terrorists were eliminated and the team of five army and JK personnel, comprising two Army officers, two Army soldiers and one JK Police Sub Inspector, attained martyrdom,” the official statement added.