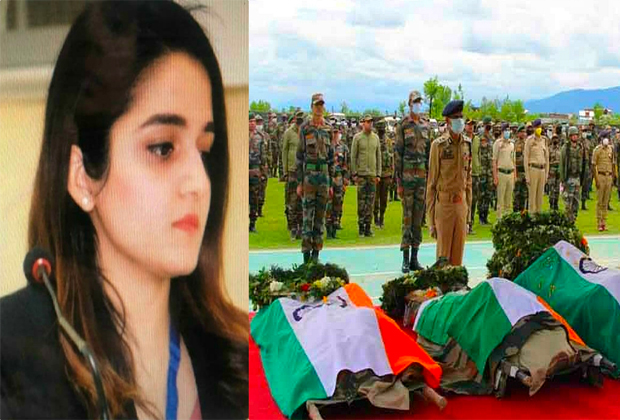 A law student from Jamia Milia Islamia University Mahoor Parvez in a social media post has referred to the Indian Army and Jammu and Kashmir police personnel who martyred in Handwara on Sunday as “war criminals”,

Apart from calling the Indian soldiers “war criminals”, she also referred to the terrorists killed in the operation as “liberators” who pick up guns.

The BA-LLB (Self-Finance) student shared a picture of five martyrs in her Instagram story and wrote,

“Why are you all obsessed with glorifying war criminals? These forces have illegally occupied and committed gross human rights violations in Kashmir for 70+ years. And yet the one who picks up the gun to liberate Kashmir is a terrorist to you and these are martyrs? Make it make sense.” 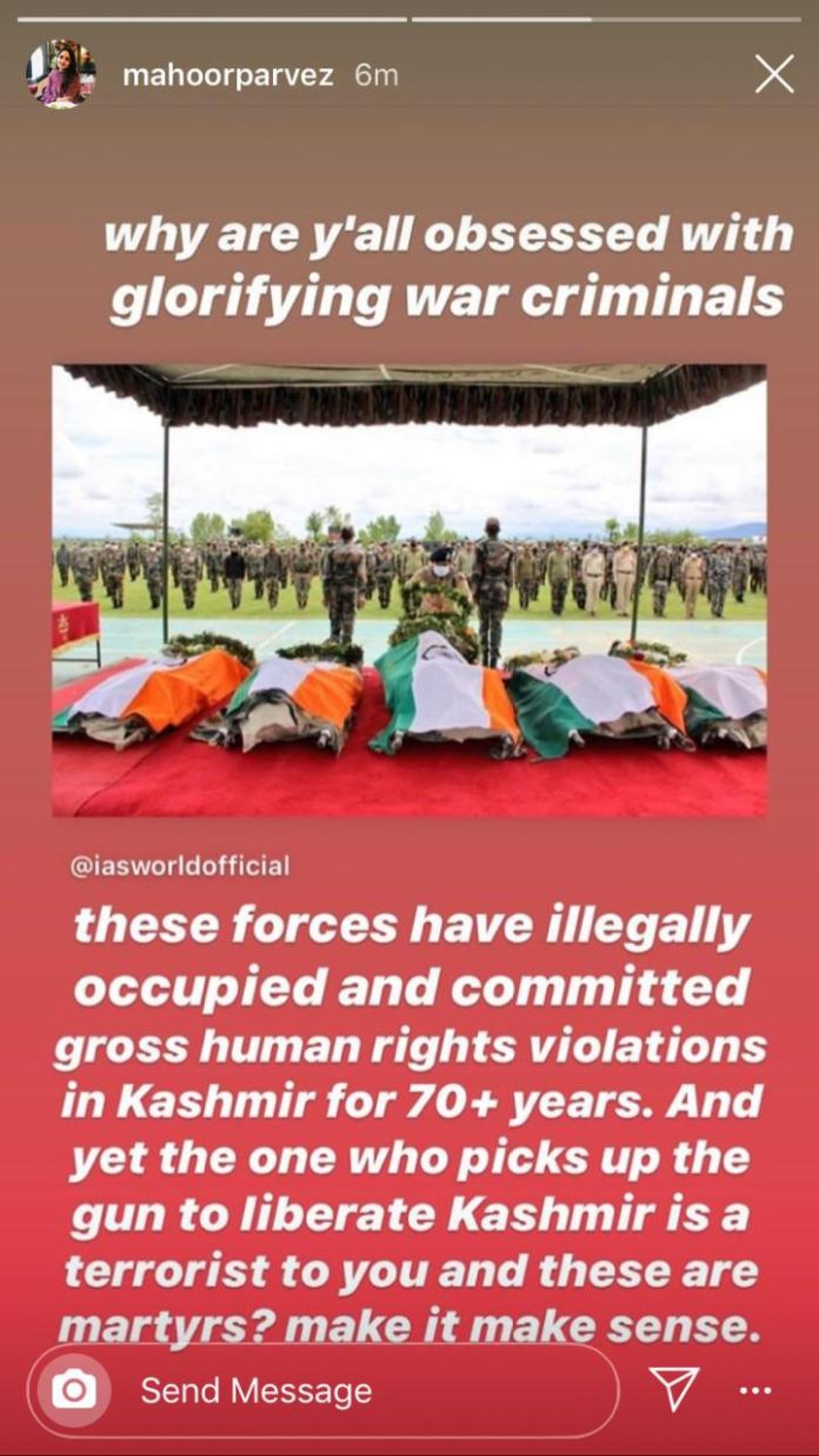 Mahoor Parvez has now deleted her Instagram and other social media profiles.

Four Indian Army personnel including a Colonel, a Major and two jawans from the 21 Rajputana Rifles, and a J&K cop had lost lives in an encounter with terrorists. The encounter took place in the Chanjmulla area of North Kashmir’s Handwara in Kupwara District.

After her remarks began to receive outrage on social media, law firm Khaitan and Co. where she had earlier interned distanced itself from her comments on Indian security forces.

“There has been a tweet related to the recent unfortunate incident in Kashmir, purportedly by a member of our Firm. This is to clarify that the person was a student intern in Oct 2019 & has no connection with the firm anymore (formal or informal) whatsoever,” the law firm tweeted.

The student at the centrally funded varsity had also worked as a volunteer at educational non-governmental organisation (NGO) Teach for India (TFI) in 2017.

TFI too took to Twitter to clarify its disassociation from Parvez and her remarks and said, “It’s been brought to our attention that an Instagram story was posted about an unfortunate incident by an individual who was a volunteer with us in 2017. We do not endorse or support the views. This said person currently has no association with Teach For India.”

However, by the time of filing the report, there had been no response from the Jamia administration regarding Parvez’s remarks. Several social media users slammed her views and sought inquiry by the Delhi Police.

Support pours in for Mahoor Parvez

Soon, support poured in for Parvez where Islamists joined in to defend her comments as ‘freedom of expression’.

The five security personnel were martyred while they were trying to rescue civilians who were held hostage by the Lashkar-e-Taiba terrorists. One of the terrorist was top Pakistani LeT leader Haider. One Adil Saifudheen, a former Jamia student came out in support of Parvez and questioned whether it is wrong to demand accountability from the government for ‘human rights violation’.

When someone called out Parvez as a terrorist sympathiser, another one of her supporters, Arshad, referred to him as ‘gobar’ (cow dung). The Pulwama terrorist who killed 40 CRPF soldiers in February 2019, in a video released after his suicide attack, had said that he was doing it to kill the ones who drink cow’s urine. The cow urine and cow dung jibe is often used by Islamists and terrorists to spew venom on Hindus. He further that he concurs what Parvez has said.

Pakistanis on Sunday took to Twitter to celebrate as five Army personnel lost their lives in the terrorist encounter in Handwara, Jammu & Kashmir. The Islamists mocked the Handwara by claiming that it was a repeat of Abhinandan Varthaman episode, in which the Airforce fighter pilot was captured by Pakistani Army right after Indian Airforce had stuck terrorist hubs at Balakot inside Pakistan.