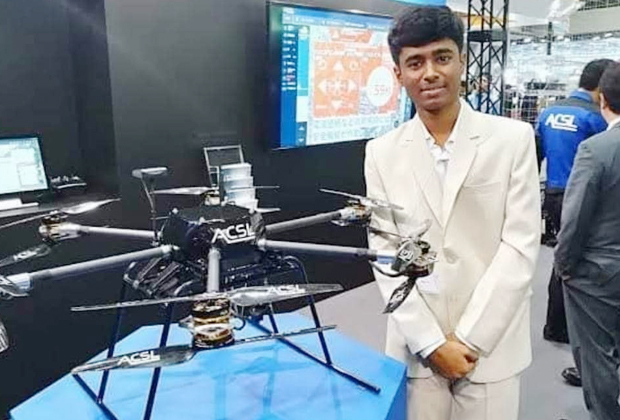 New Delhi. Pratap, all of 22, has achieved what many only dream of. Pratap won the 1st prize at a Drone competition in Japan, and Prime Minister Narendra Modi has honoured him with an award and has asked DRDO to absorb him for his inventions in Drone technology.

Pratap’s accomplishments have been talk of the town and have inspired many youngsters to persevere and achieve their dreams. However, Pratap’s path to present success has not been easy and was full of thorns.

Pratap is a native of Netkal village in Malavalli Taluk of Mandya district in Karnataka. He comes from a family of farmers. His father Marimaddaiah was a farmer too and mother Savita, a housewife. Earning a few thousand rupees a month was just enough to feed the family. However, Pratap was enamoured by eagles, helicopters, and other flying objects since his childhood.

His inquisitiveness in flying objects created interest in science and electronics. He started to develop small robots and working models from waste materials while at school itself. He won several prizes in school with his science projects.

While studying in Pre-university, he acquainted himself with various websites such as Aviation, Space, Rolls Royce cars, Boeing 777, etc. by browsing from a cyber cafe near his house. Though he wished to pursue engineering, his family could not afford the fees, and hence he opted to study BSc in Physics at JSS College, Mysore.

Unable to pay hostel fees at the college, he was thrown out of the hostel. For a few days, he was forced to sleep at the Mysore Bus stand and had to wash his clothes in a public toilet. Such experiences did not deter Pratap, and he continued to learn computer languages such as C++, Java and Python on his own. He also learnt about creating Drones through eWaste, and this opened his path to success.

While trying to create his first drone from eWaste, Pratap failed nearly 80 times. But he learnt a lot during his trials and was finally able to develop a drone that was good enough to participate in a contest. He took his drone to a Drone model competition at IIT Delhi. Pratap, who was literally in shabby clothes compared to the other competitors at IIT Delhi, focused on the competition instead. Here he won the 2nd prize after which the organisers urged him to participate in the world-renowned International Drone competition in Japan that was to be held November 27 to December 2, 2017.

Going to Japan wasn’t a straight forward path. In order to be eligible, his thesis on the drone he was to build had to be approved by as academic Professor at a Chennai college. After gathering the necessary money, Pratap went to Chennai for the first time and with great difficulty was able to get the approval of the Professor. The next challenge was to find funds for his travel to Japan and the related arrangements. Hailing from a humble background, arranging Rs 60,000 to go to Japan was a huge task.

Luckily, a philanthropist from Mysore sponsored his flight ticket, but he needed more for the entire trip. The rest of the money was arranged by selling his mother’s Mangala Sutra. After going through all this, he managed to reach Tokyo in his maiden flight to Japan all alone. When Pratap landed there, he had only Rs 1400 in his pocket. He could not afford the famous Bullet Trains in Japan. He then decided to carry his luggage along with his drone, which together weighed around 360 Kgs in a regular train by paying the extra amount. Some distance he covered by walk to save money as even taxi/cabs were costly. His mother’s Mangala Sutra finally enabled him to reach the destination where the competition was to take place.

He participated in the Drone competition where participants from 127 nations were present. Pratap showcased and flew his drone, which he called ‘Eagle’ and mesmerised the audience. However, after the competition, as the results were being announced, there was no mention of his name until the very last. As the top three names were to be announced, Pratap was dejected and started walking back, thinking that he had lost. The judges announced the third prize, then the second and finally the first prize was announced. “Please welcome Mr. Pratap, Gold Medalist from India”, said the judges and Pratap’s joy knew no bounds. Pratap’s Gold medal at the Drone competition saw Indian tricolour fly above that of USA and Japan. He was rewarded with $10000 as the prize money. His victory at the competition was the beginning of the accolades he was to receive. Coming to know of his struggle and accomplishments, Japanese Nobel laureate Hideki Shirakawa invited him to his home. It was an experience that Pratap cherishes very much. He was congratulated by MLA’s and MP’s of Karnataka and later by PM Modi to called and congratulated him.

In the subsequent days, Pratap participated in competitions in other countries. He won the ‘Albert Einstein’s Innovation Medal’ at the 2018 International Exhibition in Germany. However, once when he was in France, he ran out of money and had no money left for the return flight to India. During his stay, his achievements were recognised by France and his photo had appeared in a local newspaper. The airport staff recognised him, and despite not knowing him in person, they gave him a special treat and booked a seat for him on a business class flight.

In service of Motherland

Achievements of Pratap have been recognised in several countries like Japan, Germany and France. In each of these countries and elsewhere, he has received offers from government agencies and companies which have offered him millions of rupees, houses and huge perks. But Pratap is very clear that he wishes to work for his Motherland.

Former President APJ Abdul Kalam has always inspired Pratap. He says that he grew watching and reading him. It is Kalam who inspired him to work for the nation, says Pratap. It has been reported that PM Modi has suggested the Pratap be absorbed by the DRDO to continue his work and further research in drone technology.

The drone developed by Pratap is a technological breakthrough in India. His drone, named ‘Eagle’, has the technology to detect people at the border instantly. It can be used to ascertain if they are intruders or anyone in danger. He is also working on drones that will benefit the farmers in planning for crops, soil quality, and other parameters.