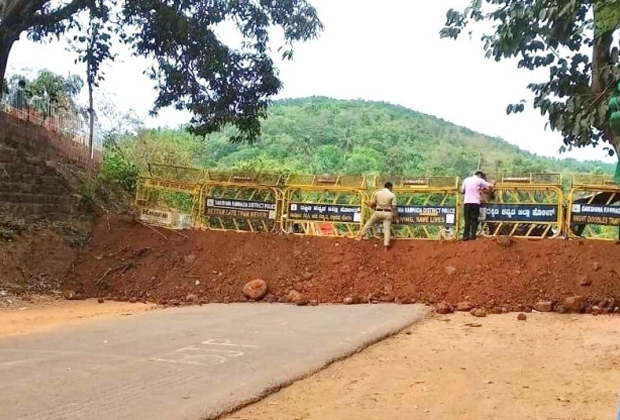 Announcing the decision, Kerala Revenue minister E Chandrasekaran said that the decision was taken at the meeting of elected representatives in order to stop the spread of Corona and to implement social distancing norms. He also said that those coming from international destination will have to undergo a mandatory quarantine. Those coming from other states have to register on the state’s COVID19 Jagrata portal and have to follow quarantine rules too and anyone found violating the same would be dealt strictly, he said.

The order applies to everyone including health workers and doctors, say Kerala government sources.

However, the decision has been condemned by people of Kasaragod as they say that it has not been taken after due consideration. The Kerala government order will badly affect the daily commuters from Kasargod district in Kerala who have to travel to Mangalore and Puttur and nearby cities in Karnataka for work. Kasargod residents say that the decision is totally unscientific and insensitive.

Estimates suggest that nearly 50% of the residents of Kasaragod district depend on Mangalore for their jobs, business and health facilities. Every day thousands of people commute to Mangalore to attend to their jobs and return in the evening. Such daily commuters are dependent on their work locations in border districts of Karnataka to earn a living and return the same day to Kasargod.

Incidentally, Karnataka government had opened its borders to the residents of Kasargod on their request so that they could reach their work places. It had also mandated that such commuters have to return the same day to Kasargod. But the latest decision of Kerala government will leave them in the lurch as they neither stay in Karnataka nor return to Kerala for the next 28 days.

Consequently, as the decision was made public, people of Kasargod who had to travel to Karnataka for work clashed with the Police creating a tense atmosphere at the border. The residents say the just like the Karnataka government, the Kerala government too could have exempted them from the rule as they have to travel for work only.

The protesters demanded that just as Karnataka gives Daily Passes, Kerala government too can consider providing the same instead of ceasing all travel. The Kerala government cannot absolve its responsibility of its own citizens and put the onus on Karnataka for the next 28 days, they argue.

Many residents who are angry over the decision have alleged step-motherly treatment to the residents of Kasargod. While people from Mumbai, Dubai where Corona infections are very high and welcomed with open arms, the difficulties of Kasargod residents are not even considered when the cases in Kasargod are negligible they say.