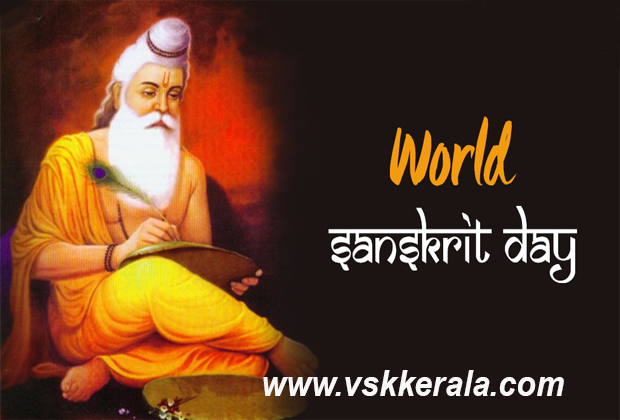 World Sanskrit Day is also known as Sanskrit Diwas which is celebrated every year on Shravana Purnima that is on full moon day in the month of Shravana according to the Hindu calendar.This year Sanskrit Diwas falls on Monday, August 3rd. World Sanskrit Day or Sanskrit Diwas not only promote but also revive the ancient language of India i.e. Sanskrit. It is an old Indo-Aryan language. Now, it is declared as a classical language which is known for its scientific structure and is in high demand all over the world.

Sanskrit language is believed to be originated in India around 3500 years ago. The term Sanskrit is derived from the conjoining of the prefix ‘Sam’ meaning ‘Samyak’ which indicates ‘entirely’ and ‘krit’ indicates ‘done’. In terms of communication, reading and hearing Sanskrit term indicates perfectly or entirely done.

Sanskrit language is also termed as Dev Vani means Gods language. It is believed that Sanskrit language have been generated by the God Brahma who passed it to the rishis or sages that were living in celestial abodes and further they communicated it to their earthly disciples from where it spread on the earth. In the written form the origin of the Sanskrit language is traced back to the 2nd millennium BCE when the Rig Veda a collection of hymns is assumed to have been written.

Sanskrit in literary terms is classified into two different periods, the Vedic and Classical. In the Vedas sacred texts, Vedic Sanskrit is found mainly in the Rig Veda, the Puranas and the Upanishads. The Vedas were composed in the period 1000 to 500 BCE.

In 1969, World Sanskrit Day or Sanskrit Diwas was first time celebrated. It comprises several events and full day seminars which talked about the importance of Sanskrit language, its impact and promote this beautiful language Sanskrit. As we know that in pujas, while reciting mantras Sanskrit as a language is used. Sanskrit Diwas is celebrated to spread awareness about the language Sanskrit. It attributes the rich culture of India. In fact some of the folk tales, stories of India are in Sanskrit language. Also, some Europeans are impressed by the Sanskrit language. One of them was an English Scholar in Sanskrit who came to India as a judge of the British Supreme Court in Calcutta in 1783. He was the founder of the Asian Society. Do you know that he had translated several books in to English namely Abhijana Shakuntala, Ritu Samhara (written by Kalidasa in Sanskrit) and Gita Govinda (written by Jayadeva). William Jones later also translated Manusmriti into English.

Another scholar Sir Charles Wilkins in 1785 translated the Bhagavad Gita in to English. The German philologist Max Muller also translated Hitopdesh which is a collection of Indian fables into German.

The main objective of celebrating Sanskrit Diwas or World Sanskrit Day is to promote the language Sanskrit. Do you know in India being an ancient language small percentage of the population speak Sanskrit? However, now several people are registering themselves in Sanskrit language course. It is important to preserve this forgotten language. No doubt, the significance of this language lies in the literature and some works are also available in Sanskrit language. This language is a flow of spirituality and is a combination of perfect grammar.

Some interesting facts about Sanskrit language

– This language has an organised grammatical structure. Even the vowels and consonants are arranged in a scientific pattern. It is said that a person can express himself or herself in Sanskrit in one word only.

– Do you know that in English language there are words whose origin can be traced back to Sanskrit like bangle from bangri, sugar from sakara, cash from karsha etc.

– In Karnataka, there is a village where everyone speaks in Sanskrit language. Name of the village is Mattur in Shimoga district.

– Sanskrit language is declared as an official language of Uttarakhand.

– Sudharma is the only daily newspaper in the world in Sanskrit language. It has been published since 1970 from Mysore, Karnataka and is available online.

– In classical music that is in the Carnatic and Hindustani, Sanskrit is used.

– Sanskrit language has the largest vocabulary of about 102 arab 78 crore 50 lakh words.

– The most computer friendly language is Sanskrit. According to NASA scientist Rick Briggs, Sanskrit is the only unambiguous language in existence. There is a University in America dedicated to Sanskrit. Also, NASA has a department for research on Sanskrit manuscripts.

So, World Sanskrit Day or Sanskrit Diwas is celebrated to spread the importance of Sanskrit language which is one of the oldest languages of Ancient times.