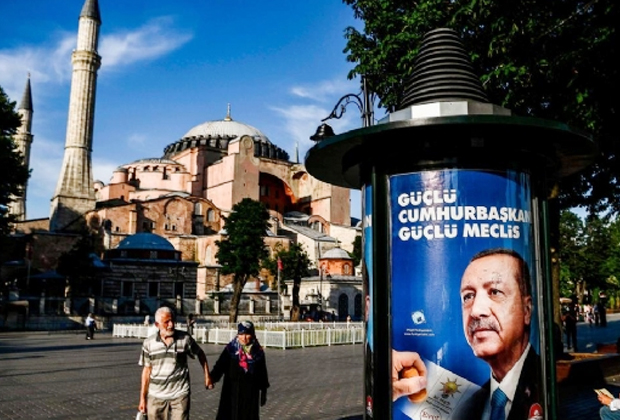 Hurting religious sentiments of millions of Christians in the country, Indian Union Muslim League (IUML) extended wholehearted support to Islamist Turkey and its extremist president Tayyip Erdogan in the move to convert the ancient Christian Church Hagia Sophia into a mosque.

Hailing the controversial decision of Turkey, senior IUML leader Panakkad Sadiq Ali Shihab wrote an article in the party’s mouthpiece Chandrika, in which he justified the act citing that the freedom to practice Islam is restricted in many European countries. “Many European countries, which have opposed Turkey’s decision on Hagia Sophia, have not allowed Muslims the right to offer namaz… when all contemporary Christian religious and political leaders disagree with the conversion… they do not make any stake over its ownership realising that historically there is no ground for such a demand,” he wrote.

“Their (Europe’s) secularism is hollow. They have converted more than 350 mosques into Churches and theaters,” he alleged in his article.

Sadiq Ali is a member of the Malappuram-based Panakkad family, which literally ‘owns’ the Muslim League. “Turkey president Tayyip Erdogan, who is raising his voice in the international community for the systematically-oppressed Muslims across the world, has been attacked under the guise of pseudo secularism,” he wrote.

However, the article is not available on the website now.

The state BJP leaders and various Christian Churches registered strong protests against the Muslim League’s communal stand on the Hagia Sophia issue. The Muslim League, along with other Islamist parties had strongly opposed the Ram Janmabhumi movement which reclaimed the ancient Ram temple in Ayodhya which was destroyed by Babar’s army.

The Catholic Church in Kerala issued a statement against the IUML leader’s remarks. In a statement, Kerala Catholic Bishops Council spokesperson Fr Varghese Vallikkatt said, “Before glorifying the encroachment of Hagia Sophia Church, IUML leader Sadiq Ali should have learned history. To justify Erdogan would be a liability of political Islamists in Kerala… that should not be at the cost of endangering the future of Indian secular democracy and peaceful co-existence of religions. There is danger in unilaterally interpreting the history.”