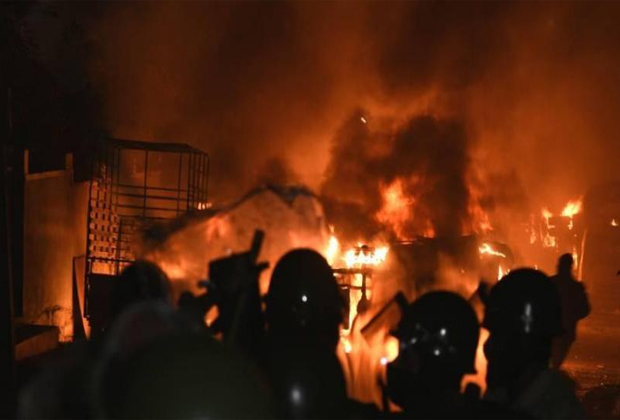 Bengaluru (VSK). Muslim community in Bengaluru unleashed unprecedented violence over a Facebook meme on Prophet Muhammad. The mob attacked house of Cong MLA Akhanda Srinivasa Murthy, the nephew of whom had posted on his FB wall. The event unfolded yesterday evening which continued late into night with the mob vandalising police vehicle, police station and public property. Few media reporters were also manhandled and were admitted to hospitals. Police opened firing to clear the mob killing two and injuring three rioters.

More than 60 police personnel have been injured while performing duty. The death toll is said to have risen to 3 according to latest reports.  Panic and fear prevailed among people belonging to minority (Hindu) community in the area under attack.

According to initial information gathered from the sources available to VSK, a group of Muslim youth, agitated over the FB Post first approached the SDPI leaders and not the cybercrime branch.

It is reported that the SDPI leaders and the local youth were successful in mobilizing a huge mob of around three to four thousand rioters in quick time and unleashed the violence. The sources have said that SDPI leaders were on the ground and in the name of pacifying their brethren were inciting the mob.

Local residents say they have never before seen a violence of this magnitude. The locals also informed the media that innocent people were physically assaulted on roads creating a war like situation.

Home Minister Basavaraj Bommai instructed the police to take control of situation. Police say that the narrow lanes accommodated more than 3 to 4 thousand rioters which made it difficult initially to curb the situation. Eventually police opened firing as the lost resort to scramble the violent mob killing one on spot and injuring three others. Authorities immediately imposed Sec 144 to take control of the situation.

Speaking to the media former minister and Muslim leader UT Khader put blame on Govt for failure of law and order avoiding to comment on hooligans who wrecked havoc.

Ministers R. Ashok and Basavaraj Bommai assured the people that those involved in violence will not be spared and those behind the screen will also be exposed and brought to books.

The situation is still said to be simmering with additional police from adjoining districts being deployed to contain the situation from any further escalation. Mujammil Pasha, Dist Sec. of SDPI, the kingpin behind the violence has been arrested. Also Ayaz a volunteer with SDPI is said to have been arrested. The latest report says that over 100 culprits who rioted yesterday have been arrested.

As the police teams tried to control the mob from damaging property and setting things on fire, the mob rampaged through the locality. Around 10-15 cars were set on fire in the area while a part of the MLA’s residence was also damaged. Police vehicles were damaged and set on fire. A group entered a basement area where 200-250 vehicles were set on fire, said the Commissioner.