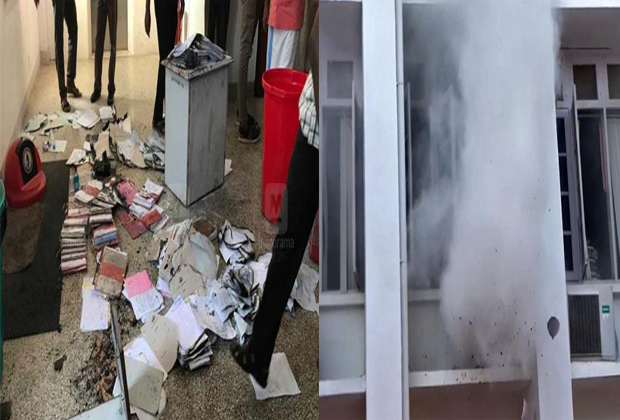 Thiruvananthapuram: A fire broke out at the Kerala Government Secretariat’s protocol department on Tuesday around 5 pm. The fire was reported at the north sandwich block where the General Administration Department is situated.

Some files, documents and a computer were destroyed. Fire and rescue services arrived at the spot and put off the fire.

According to reports, fire started at the office of Chief Protocol Officer. The details of the files torched is not known yet. Prima facie, the reason for fire is said to be short circuit.

The offices relating to political matters are situated in the north sandwich block. Ironically, the National Investigation Agency had demanded the certain files, documents and visuals relating to gold smuggling case from the protocol officer. At the same time, Additional Secretary to General Administration Department P Honey told that no important files were destroyed in the fire.

One of the employee of the department had tested Covid positive on Monday. Hence all others were quarantined. Only two persons were in the office on Tuesday. A short circuit from the computer resulted in the fire, honey said.

The files relating to room bookings at various guest houses were destroyed. All these were from four months back. No important file was kept in the room which caught fire, he added.

Meanwhile, Opposition Leader Ramesh Chennithala alleged that the office was deliberately set on fire to destroy evidences relating to gold smuggling case. He also demanded a detailed and unbiased probe into the incident. BJP State President K Surendran slammed the government stating that it was a deliberate attempt to sabotage evidence and documents pertaining to the high-profile gold smuggling case in Thiruvananthapuram.