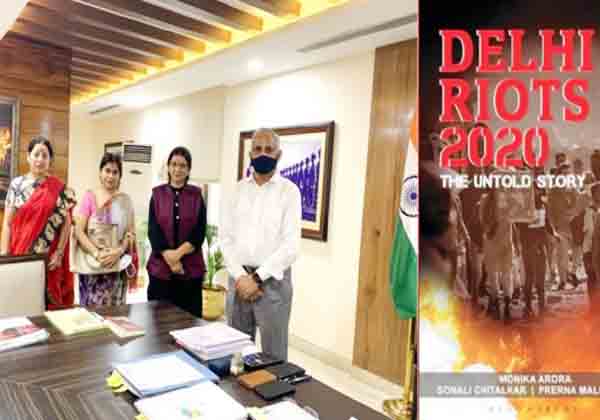 In a significant development, the authors of the upcoming book Delhi Riots 2020: The Untold Story met the Delhi Commissioner of Police on September 3rd and have submitted a complaint over the intimidation and violation of their right of freedom of expression by their former published Bloomsbury and several other media organisations and individuals for being part of a well-hatched conspiracy to stop the book and the truth about the riots coming out in public.

In the complaint submitted under the GIA (Group of Intellectuals and Academicians) letterhead to the commissioner, the authors of the book narrate how the publishing house Bloomsbury had signed a MoU to publish the book, went through multiple drafts, published the final draft after approving the same, delivered the first copies to the author’s home but withdrew the book just before the scheduled web-launch programme of the book by the authors.

The authors charge that Bloomsbury withdrew the book as a section of people had pressurised Bloomsbury UK to take the withdrawal decision and have charged news portals News Laundry, The Quint along with Maoist supporter Nandini Sundar, Pakistani writer Aatish Taseer, Left Historian William Darlymple, Congress activist Saket Gokhale, Islamist anchor Arfa Khanum Sherwani, Left activist Meena Kandasamy and others apart from the publisher Bloomsbury for criminal intimidation, criminal breach of trust and cheating, mischief and misappropriation of property under Section 403,405,406,409,415, 420, 425, 426 of IPC and under 379,410,411 of IPC.

The complaint charges Bloomsbury for deliberately and willfully expunged their work effort and skill with dishonest intentions, and diminishing goodwill, reputation and standing of the authors. They also charge Bloomsbury that without their knowledge and consent rescinded from performing its obligations under the terms of the agreement and leaked a PDF version of the book in public to hamper any future sales.

On August 22, Bloomsbury India had chickened out of publishing the book on Delhi anti-Hindu riots by Monika Arora, Sonali Chitalkar and Prerna Malhotra under Jihadi-Naxal pressure. The online lynch mob was led by people such as controversial actress Swara Bhaskar, Congress supporter Saket Gokhale, Left author Meena Kandasamy, Hindubhopic journalists’ like Hartosh Singh Bal, anti-India author Rana Ayyub, among others. The South Asia Solidarity Initiative, which has links to Islamists, also jumped on the bandwagon to bully Bloomsbury India into withdrawing the book. Pakistani writer Aatish Taseer is said to have influenced Left Historian William Darlymple to pressurise Bloomsbury UK to withdraw the book.

Following Bloomsbury India’s decision to capitulate to the Jihadi-Naxal threat and dump the book ‘Delhi Riots 2020 – Untold Story’, Garuda Prakashan took up the task to republish the book under its wings. The book was made available for pre-order on Garuda Prakashan’s website on 23rd August and since then the publisher has received a whopping orders for more than 20,000 plus books. The Tamil version of the book will be published by Chennai-based FootPrints Publication.