Unprecedented Popular Upsurge in Kerala Against Corrupt Nepotic LDF Regime led by ABVP, being crushed with brute force like it happened during Indira Gandhi's emergency. Public anger against the state government increases as involvement of more ministers in smuggling and money laundering is exposed. 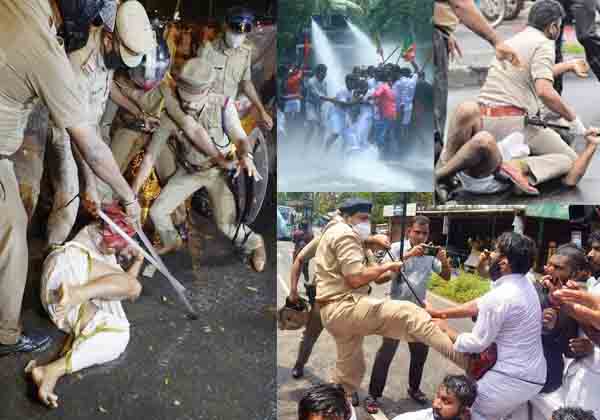 Police of Pinarayi Vijayan, CPM supremo and Kerala CM in-charge of the home ministry, unleashes the worst form of police atrocities against the workers of BJP, Bharatheeya Janata Yuva Morcha (BJYM) and ABVP. They are tortured throughout Kerala as they take into the streets peacefully demanding the expulsion of Higher Education & Waqf minister K.T. Jaleel from the ministry.

Protests started as soon Jaleel was summoned by the Enforce Directorate (ED) for interrogating him in connection with his alleged involvement in the infamous gold smuggling, the illegal import of Quran from UAE and his own admission that he had distributed food packets, in his constituency, donated by UAE Consulate. He has violated all protocols as he is not supposed to work with a foreign Consulate sans Foreign Ministry’s nod and import of religious texts are illegal.

Tortures have been replicas of the inhuman police tortures of Emergency days (1975 – 1977), or even worse than that. Jaleel put himself in a shameful plight as he hid the fact from the media that he was summoned by ED. Even after the interrogation he hid it. Not only that he kept on lying to the media that he had not received any summons nor he underwent any ED interrogation.

Day by day, the embarrassment the Pinarayi regime suffers goes up into more dimensions. Now, the intimate rapport Jayson, the son of Pinarayi’s trusted lieutenant and No: 2 in the cabinet E.P. Jayarajan, enjoyed with Swapna Suresh, the main accused in the gold smuggling case linked with the CM’s office, is revealed; the latest incident in the series ! Swapna is the comrade-in-arms of M. Shivashankar IAS, the suspended Principal Secretary of the CM.

Media is celebrating the news of the party hosted by the same VIP son in honour of Swapna Suresh. Jayson’s picture posing with Swapna has been doing the rounds in social media. And, P.K. Indira, the better half of E.P. Jayarajan, visited the bank to open a locker breaking the COVID-19 protocol. She had submitted a sample for COVID-19 tests. As per the COVID-19 protocol one has remained in quarantine until the test results come.

Now, the bank employees are in quarantine, thanks to the “anti-social” gesture of the lady. It is to be remembered that she retired from the same branch of the bank as its manager ! The right thinking people obviously suspect that she was trying to ‘salvage’ some ‘fortunes’ like illegal documents, money or gold, from the locker as soon as her son’s close links with Swapna were exposed. It is too early to forget that NIA had recovered gold and one crore rupees from Swapna’s bank locker.

Congress also has entered into the arena of agitation. But, the leadership of the agitation is naturally in the hands of BJP, BJYM, Bharatheeya Mahila Morcha and ABVP. State leaders of all these organisations have been beaten and kicked by the police like one does against enemy soldiers, in most cases in Taliban style. Leaders are hospitalized with seriously broken and bleeding heads, legs and arms. State spokesman Adv. B. Gopalakrishnan’s eye is seriously injured in the water cannon. But they are determined to go ahead with their agitations until they achieve their goals, that is the resignation of CM Pinarayi and also Jaleel.