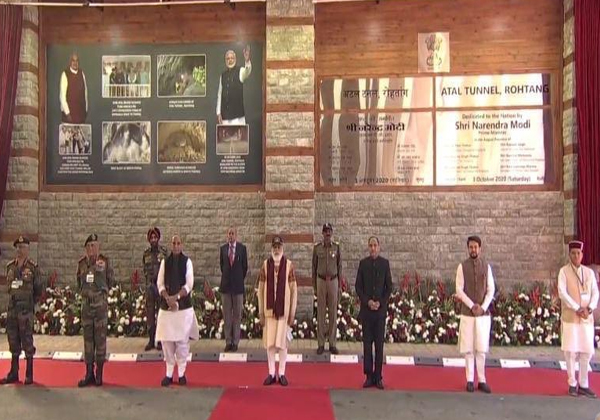 The strategically significant Tunnel has a roadway of 8 metres and has an overhead clearance of 5.525 metres.

Speaking on occasion, Modi said the inauguration of Atal Tunnel not only fulfilled the dreams of former Prime Minister Atal Bihari Vajpayee but the decades-old wait of people of Himachal Pradesh. Defence Minister Rajnath Singh was alongside Modi during the inauguration.

“Our government stands firm, what we say, we do it. Nothing is more important for us than the good of the country. But it is also true for long there used to compromise on national interest,” he said, making a veiled attack on Congress which has been in power in the centre for long.

He also referred to Ladakh’s Daulat Begh Oldie airstrip and wondered why it was kept closed for 40-50 years. “Kya majboori thi, kya dabao tha, mein iskey vistar mein nahi jana chahta (What was the compulsion, what were the pressures, I do not want to talk much on these now),” the Prime Minister said.

Daulat Beg Oldi has one of the world’s highest airstrips, at an altitude of 5,065 meters or 16,614 feet.
The airstrip is just 8 km south of the Chinese border and 9 km northwest of the Aksai Chin Line of Actual Control (LAC) between India and China.

Former Air Marshal Pranab Kumar Barbora, according to reports, has said sometime back that he flew to Daulat Beg Oldi airstrip in Ladakh in 2008 after 43 years without informing the government first, because previous requests for the same were denied.

The Daulat Beg Oldi base has played a vital role for Indian forces during the current stand-off. It was originally built during the Indo-China war in 1962.

The Border Roads Organisation (BRO) completed the construction of the Atal Tunnel within its estimated cost of construction, Defence Minister Rajnath Singh said adding the engineering marvel is aptly dedicated to the soldiers guarding the borders and those living near border areas. Chief of Defence Staff Gen Bipin Rawat was also present.

The Tunnel in Himachal Pradesh’s Rohtang will reduce the distance between Manali and Leh in the newly-created Union Territory of Ladakh by 46 km and the travel time by about five hours. Built by the Border Roads Organisation, it is the longest highway tunnel in the world.

The Tunnel has a roadway of 8 metres and has an overhead clearance of 5.525 metres. The Tunnel has been built at the cost of about Rs 3,300 crore.

The BRO men and officials worked relentlessly to overcome major geological, terrain and weather challenges that included the most difficult stretch of the 587-metre Seri Nalah Fault Zone, officials say. The breakthrough from both ends was achieved on October 15, 2017.

Telephone facilities have been installed at every 150 metres, a fire hydrant every 60 metre and emergency exits every 500 metres. There will be air quality monitors every 1 km, broadcasting system and automatic incident detection system with CCTV cameras every 250 metres

Vajpayee reportedly got the idea for constructing the Tunnel on a suggestion from his friend Arjun Gopal of Tashi Dobhe village in Lahaul, Himachal Pradesh.

The 9.02-km Tunnel connects Manali to Lahaul-Spiti valley throughout the year. Notably, the valley was earlier cut off for about six months every year due to heavy snowfall.

Originally conceptualised by the Atal Bihari Vajpayee government on June 3, 2000, the foundation stone for the access road to the south portal of the Tunnel was laid on May 26, 2002.

The Modi government decided to name the Rohtang Tunnel as Atal Tunnel in December 2019 in honour of the former prime minister, who passed away on August 16, 2018.