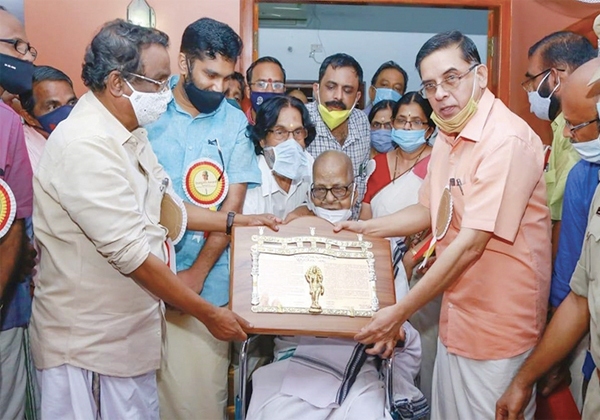 Renowned Malayalam poet and Jnanpith laureate Akkitham Achuthan Namboothiri passed away this morning. He was 94 years old. He was undergoing treatment at a private hospital in Thrissur for age-related ailments. Akkitham was conferred with the 55th Jnanpith award for his lifetime contribution to the literature.

Akkitham Achuthan Namboothiri was born on March 18, 1926, at Amettikkara, near Kumaranallur in Palakkad, Kerala, to Amettu Akkithathu Manayil Vasudevan Namboothiri and Checkur Manaykkal Parvathy Antharjanam. After studying Sanskrit, Astrology and Music, he joined college for higher education but did not complete his graduation. He started his career as an editor of Unni Namboothiri magazine. In 1956, he joined the Kozhikode station of the All India Radio (AIR) where he worked until 1975 after which he was transferred to the Thrissur station of the AIR. He was also associated with Anaadi, a literary movement for popularising studies of Vedas.

The Jnanpith Award came in Mahakavi Akkitham Achuthan Namboothiri’s way rather late, though his name is said to have figured on the list of candidates a few times in the past. In 2007, there was near unanimity on his name among the members of the award selection committee. However, Communists scuttled Akkitham’s chance to win Jnanpith as they detested the great poet because he left behind Marxism and embraced Hindu universalism.