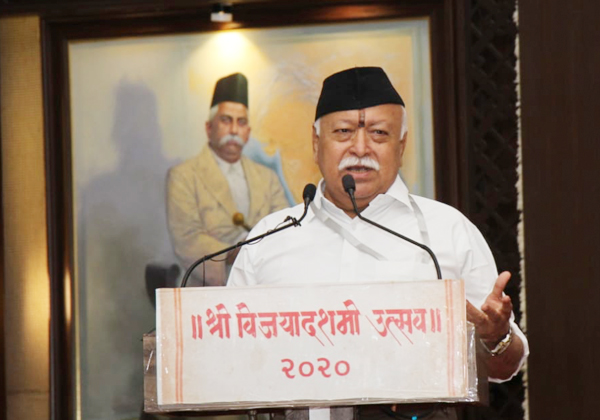 Mohan Bhagwat said, “Members of this conspiratorial gang instigate and promote slogans like “Bharat tere tukde honge” (Bharat will be disintegrated). An unusual blend of political interest, separatist and fundamentalist tendencies, a hatred of Bharat and a quest for global domination is working to dampen Bharatiya unity”.

“While remaining free from the influence of these forces we must focus on integrating our society through peaceful means, in obeisance of our constitution”, he added.

“If we exercise self-control, remain balanced and keep each other’s best interest in mind then an environment of mutual trust can prevail which will aid in the resolution of old conflicts; while the mistrust that stems from contradictory behaviours would make the solutions seem unattainable and problems unfathomable. Reactionary and fearful stance and unreasonable opposition lead to uncontrolled violence and the gulf separating the people widens.”

Quoting Dr Bhimrao Ambedkar’s August 29, 1949 address to the Constituent Assembly, Sh. Bhagwat said we have to learn to identify disguised elements and defuse their conspiracies that were out to unleash “grammar of anarchy” and alert our brothers and sisters so that they cannot be shepherded away by such predators.

On achieving socio-economic self-reliance, Sh Bhagwat said, “Our Bharatiya thought does not endorse struggle as an essential ingredient of progress. Struggle is considered as a last resort for the elimination of injustice. The conceptualisation of progress here is based on cooperation and coordination. “

“Therefore, the spirit of oneness is critical to actualising self-reliance in various aspects of life. Self-reliance then essentially implies overall well-being and upliftment of the whole nation through coordinated efforts and cooperation with each other, akin to interdependent organs of one body. A policy-making process where all concerned people and parties discuss and deliberate extensively and draw consentient conclusions fosters the spirit of oneness and trust among all.Open dialogue with all, drawing consensus through discussion, ensuring cooperation and resultant trust – this is the prescribed method for securing credibility and eminence among one’s family and community”, he said.

“Until recently the philosophy of integrating the world on the basis of the market forces dominated human imagination but with the latest turn of events, the idea of safeguarding life and exercising international cooperation by promoting unique strengths and assets of each country is an idea that has started to take shape in the global mind. The philosophy of ‘Swadeshi’ has trumped once again. It is time to redefine these adages in view of the current Bhartiya context and to rebuild paths that will lead us back to our time-tested values and traditions,” he amplified.

On the recent border conflict, Bhagwat said, China’s role in the breakout of this pandemic may be disputable but its misuse of their riches by unleashing terror on the borders of Bharat and boisterous efforts to invade our territories are well-known to the whole world. Bharatiya defence forces, government and the people remained unfazed and responded sharply to this attack. This example of a strong resolution, exercising self-respect and bravery has stunned China. Going further we must be watchful and remain firm. Even in the past, the world has time and again witnessed China’s expansionist attitude.

Sarsanghchalak recommended, “Rising above China economically, strategically, in securing cooperative ties with our neighbours and at international relations is the only way to neutralise those demonic aspirations. The policies proposed by our leaders seem to be charting those very horizons. Sri Lanka, Bangladesh, Nepal and Myanmar (Bhramadesh)- such neighbouring countries have shared a friendly bond with us and are more or less aligned over issues of values and ethical code with us.”

He said, “Bharat stood strong in the face of adversity and dealt with the calamity effectively. There are some reasons why we escaped Corona debilitation that few countries could not. Our governing and administrative agencies promptly sprung up in action. They cautioned citizens, created emergency task forces and efficiently implemented control measures.”

Dr Bhagwat emphasised that many traditional habits on cleanliness and hygiene, healthy lifestyle and strengthening immunity with the science of Ayurveda also proved to be useful during this period.

He highlighted the sensitivity, cooperation and mutual trust between government agencies and the society in providing support to migrants returning to their places with food, medicines, shelter, ferrying them and arranging resting spots on their way. Women that played a very significant role in offering selfless service during last six months came in for praise and adulation by Mohan Bhagwat.

Sarsanghchalak paid rich homage and tributes to all those who sacrificed their lives in the fight against Covid 19. “I respectfully bow to all the volunteers who are known and unknown, those who are alive and who laid their lives”, he said.

He assured that swayamsevaks will play a significant role in the seva launched post-Covid 19. “To emerge from the current scenario a different kind of Sewa initiative is required. Restarting educational institutions, compensating teachers, resending students to their schools and colleges while paying a fee for the same, these tasks are arduous. Schools that stopped receiving funds cannot afford to pay their teachers. Guardians who lost their jobs or shut businesses are in a fix as they do not have funds for their ward’s fee.”

“We will have to devise service assistance to ensure the opening of schools, paying teachers’ salaries and students’ education. Displacement left many unemployed. Failing to find alternate sources of employment they are compelled to explore other sectors”.

“Getting employment in a new sector mandates prior training. These are the problems facing the displaced today. Finding a replacement for the migrant workers to complete the pending tasks that were abandoned halfway is becoming a challenge too. Therefore creating employment opportunities and providing training to the unskilled is essential. In cases where families are facing such deprivation, stress creeps up in the households. To prevent negative dispositions like crime, depression and suicide there is an extensive need of counselling and support services at this time”, Sarsanghchalak said.

Mohan Bhagwat condemned the attempts to bring about communal disharmony in aftermath of amendments made to Citizenship Act by propagating a false notion that it was aimed at restricting Muslim population. He cleared the air and pointed to the fact that constitutional provisions for granting citizenship to foreigners who come to Bharat continue to be the same. The amended Citizenship act does not oppose any religious community.

“Those who wanted to oppose the amendment in the Citizenship Act …misled our Muslim brothers by propagating a false notion that was aimed at restricting the Muslim population. Opportunists took advantage of this delicate situation by unleashing organised violence and causing unrest in the name of protests. As a consequence, a tense atmosphere was created in the country that put our communal harmony at stake,” he added.

He termed the unanimous and unambiguous judgement on the Ramjanma bhoomi delivered by Supreme Court on November 9 last year as historic. “The exemplary patience and understanding of Bharatiya people regarding this judgment became evident in the restraint along with piety and festive fervour displayed on August 5 in Ayodhya at the bhoomi pujan and shilanyas samaroh of the soon-to-be constructed Ram Mandir there,” he said.