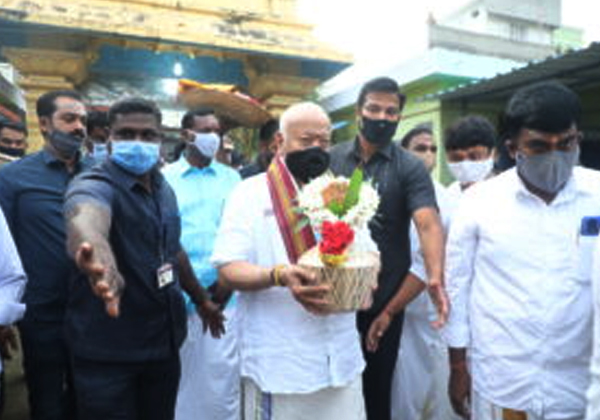 Chennai : RSS Chief Shri Mohan Bhagawat participated in the Pongal festival at Shri Navasakthi Kadumbadi Chinnamman Temple by public belonging to Ponniamman Nagar, Moolakadai with religious fervour and gaiety. He accepted Poorna Kumbha respect and took part in the temple pooja.  Following which, he took part in Gow Mata pooja and offered pongal pot to Surya Bhagwan.  He witnessed the traditional games by children and Uriyadi by elders subsequently.

In his speech, he mentioned that he is delighted to be part of Pongal celebrations in Tamil Nadu this year.  He eulogised that Surya Bhagwan does his duty like a penance and highlighted the importance of exchanging Pongal greetings with all sections of the society.  While stressing the significance of maintaining cordial relationship with all, he quoted Thirukkural to say that our words should not offend any one.

Shri Bala Subramanian, Former Grama Sabha President recited devotional song followed by Vote of Thanks by Varadarajan.  The function got concluded with a sweet note as Sarkarai Pongal was distributed to all.