It is a widely known fact that it was Indian physician Sushrutha, who lived much earlier than Al-Zahwari during the 8th century BCE, is considered to be the 'father of surgery'. 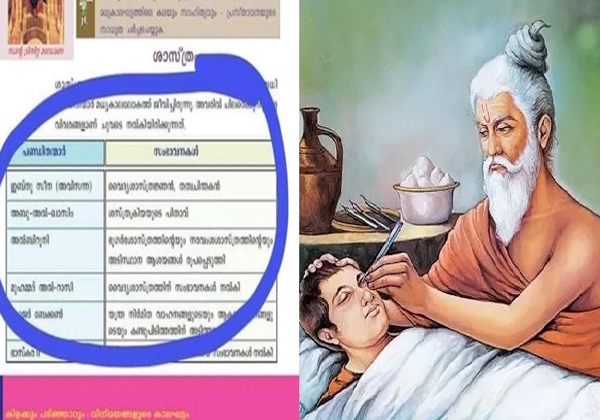 After the reports of NCERT textbook not having any information regarding some of the highly contested claims made in class 12 History textbook, another news has emerged from Kerala regarding a false claim made in the state board political science textbook. According to class 9 social science textbook, Abu al-Qasim Al-Zahwari is the ‘father of surgery’; while it is widely regarded that Indian physician Sushruta had done surgeries way back in 8th century BCE. Al-Zahwari is said to have lived in 10th century C.E.

The controversial content is printed on page 34 of the textbook under the title great people and their contributions. Calling Abu al-Qasim Al-Zahwari the father of surgery has triggered massive controversy in Kerala as people questions the state board over ignoring the fact that Sushruta is considered the ‘father of surgery’. Sushruta in his book Sushruta Samhita has given information about medicine and surgery. The Sushruta Samhita, in its extant form, in 184 chapters contains descriptions of 1,120 illnesses, 700 medicinal plants, 64 preparations from mineral sources and 57 preparations based on animal sources.

The text discusses surgical techniques of making incisions, probing, extraction of foreign bodies, alkali and thermal cauterization, tooth extraction, excisions, and trocars for draining abscess, draining hydrocele and ascitic fluid, removal of the prostate gland, urethral stricture dilatation, vesicolithotomy, hernia surgery, caesarian section, management of haemorrhoids, fistulae, laparotomy and management of intestinal obstruction, perforated intestines and accidental perforation of the abdomen with protrusion of omentum and the principles of fracture management, viz., traction, manipulation, apposition and stabilization including some measures of rehabilitation and fitting of prosthetic. It enumerates six types of dislocations, twelve varieties of fractures, and classification of the bones and their reaction to the injuries, and gives a classification of eye diseases including cataract surgery.

Questions are abounding state the state has ignored the fact despite knowing the fact that he is regarded as the father of surgery. Textbooks carrying such errors are a serious threat to the civilisation itself, as the students who learn these things will be deprived of the nation’s real history.

Interestingly, a few days before the parliamentary standing committee met to discuss the false claims made by NCERT in the history textbook and revision of the facts. The panel had met to mainly discuss the need to remove references to un-historical facts and distortions about our national heroes, to ensure proportionate references to all periods of Indian history, and to highlight the role of great women in Indian history.