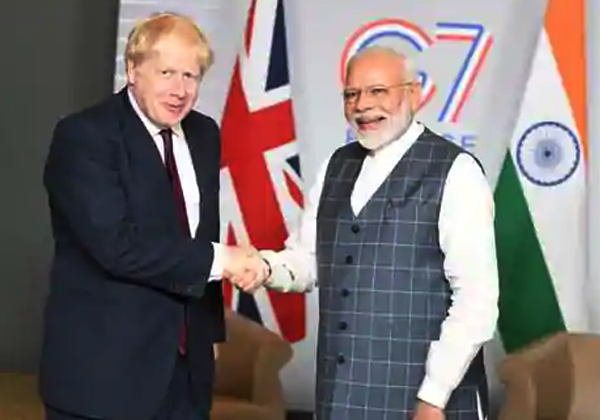 PM Boris Johnson has invited PM Modi to attend the G7 summit in June. The invitation was extended over a phone call last year. The proposed summit will be the first in-person G-7 summit in almost two years, as it will be held in the English region of Cornwall from June 11 to 13. Other than India, Australia and South Korea also invited as guest countries to attend the G7 Summit to ‘deepen the expertise and experience around the table.’

In a tweet, the UK PM wrote, “I look forward to welcoming world leaders to Cornwall for the @G7 Summit in June. My goal is to work with our friends and partners to #BuildBackBetter from the coronavirus pandemic and create a fairer, greener and more prosperous future.”

Making the invitation official, Johnson said: “As the most prominent grouping of democratic countries, the G7 has long been the catalyst for decisive international action to tackle the greatest challenges we face. From cancelling developing world debt to our universal condemnation of Russia’s annexation of Crimea, the world has looked to the G7 to apply our shared values and diplomatic might to create a more open and prosperous planet.”

The statement further read, “As ‘pharmacy of the world’, India already supplies more than 50% of the world’s vaccines, and the UK and India have worked closely together throughout the pandemic. Our Prime Ministers speak regularly and Prime Minister Johnson has said he will visit India ahead of the G7.”

“The Prime Minister’s ambition is to use the G7 to intensify cooperation between the world’s democratic and technologically advanced nations. To that end, he has invited leaders from Australia, India and South Korea to attend as guest countries to deepen the expertise and experience around the table. Between them the 10 leaders represent over 60% of the people living in democracies around the world,” an official statement said.

The UK will use the G7 Presidency to unite leading democracies to ‘help the world build back better from coronavirus’ and ‘create a greener’, more prosperous future, said an official statement of the British high commission. These nations, combined with those in the G7, represent 2.2 billion people and over half of the world’s economy. UK Prime Minister Johnson will host the summit, the first in-person gathering for the G-7 leaders in almost two years.