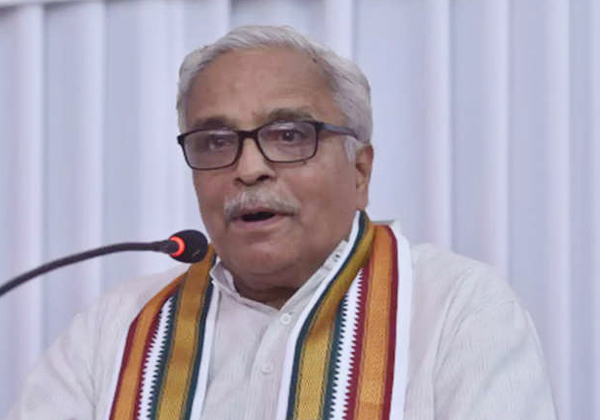 RSS Sarkaryavah Bhaiyyaji Joshi has said that the middle path should be found to resolve the issues related to the agricultural law. Both the Government and protesting farmers need to take positive initiatives in this direction.

In an interview with English daily The Indian Express, Sarkaryavah spoke in detail on various issues.

Excerpts from the conversation –

Farmers must have a discussion with the government over issues they have with the laws. Until now, it appears the government is ready to discuss. There should be a positive initiative from both sides. If agitators also take a positive approach it will be good…..No one should have a problem with an agitation taking place. But a middle ground must be found. An agitation does not just affect people associated with it, but also impacts society, directly or indirectly. It is not good for the health of society for any agitation to run for too long. So a middle ground must be found and both sides must work to find a solution.

Democracy provides an opportunity to both sides. I consider both sides right (in) their place. Agitators must consider that whatever they can get through dialogue, they must accept. The government must think about what more it can give. Agitations run and they end as well. Because a government has to make several provisions, it has limited space, while those demanding have more.

Is there anything in that law that says Muslims have to be treated in any particular way? Yes, it is our long-standing demand that Hindus have no other country to go to except India. So India has to think about giving citizenship to Hindus coming from outside. So many people from Pakistan, after suffering atrocities there, have come to India and are living on the footpaths in Delhi. And we are giving citizenship to Muslims from Pakistan as well. If the government was against minorities, it would not have given them citizenship.

There is no objection to people falling in love and marrying. But there is a difference between love marriage and love jihad. On one side, there is love and consensus, on other side there is allurement. So if something is being done through falsehood, there should be a law to deal with it. Now how tough the law should be and who should be protected, only experts can tell.

If relations have to improve, that will depend on both sides. India has never shown aggression towards China or Pakistan. We have only answered their aggression. So we have always remained positive. Now they have to think about what kind of relationship they want with us. We will not mortgage our self-respect and sovereignty for it though.