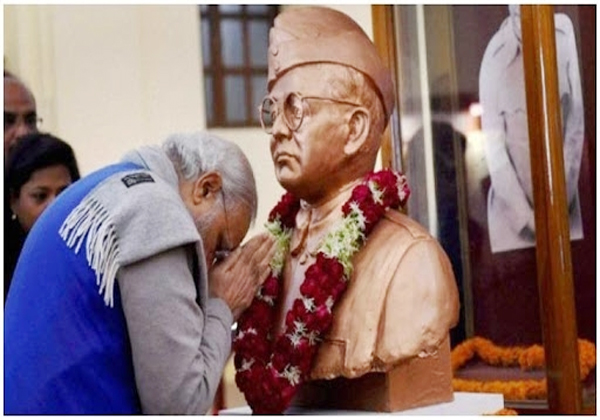 The Government of India announced on Tuesday, Jan 19, that the birth anniversary of iconic freedom fighter from Bengal, Netaji Subhash Chandra Bose, on January 23, will be celebrated as ‘Parakram Diwas’ every year.

The Union Ministry of Culture said in a Twitter missive. Prime Minister Narendra Modi is likely to make a virtual speech on Jan 23 on the occasion of the birth anniversary of Netaji or even visit Kolkata for the same.

West Bengal is set for crucial assembly polls by April-May and a fierce battle is on between the BJP and state’s ruling party Trinamool Congress.

BJP chief JP Nadda and Home Minister Amit Shah would be visiting the poll-bound state later this month. Nadda is expected in East Burdwan on Saturday. He will hold a public rally in support of the three central farm laws in Katwa’s Jagadanandapur and later a roadshow from Burdwan Clock Tower to Curzon Gate. Shah is likely to visit Thakurnagar in North 24 Parganas.

Earlier this month, the Ministry of Culture held a high-level meeting headed by Prime Minister Narendra Modi, to commemorate the 125th birth anniversary of Netaji Subhas Chandra Bose in a befitting manner.

The High Level Committee will decide on the activities for a one year long commemoration, beginning 23 January, 2021. The Members of the Committee include distinguished citizens, historians, authors, experts, family members of Netaji Subhas Chandra Bose, as well as eminent persons associated with Azad Hind Fauj (INA). The Committee will lend guidance to the commemoration activities in Delhi, Kolkata and other places associated with Netaji and Azad Hind Fauj, both in India as well as overseas.

Subhas Chandra Bose was born on 23 January 1897 in Cuttack in Odisha and left a rich legacy of his struggle and leadership in India’s freedom movement.

The saffron party is trying to woo the voters in Bengal by projecting various past masters of Bengal including Swami Vivekananda, Netaji Subhas Chandra Bose, Bankim Chandra Chattopadhyay and of course Shyama Prasad Mukherjee, the founding president of Bharatiya Hindu Mahasabha.

Bose had left a magical spell over countrymen but his disappearance in August 1945 has always remained a mystery and rather scandalous. He was not only a Man with a Mission, according to many, but a “Man of Destiny to India”.
Samar Guha, who wrote ‘Netaji – Dead or Alive?’ in 1978, and had also contested strongly the reports of the Khosla Commission, called Subhas Bose an ‘epic hero’ and described the failure to solve the mystery of Bose’s death as a “sacred national duty which we lamently failed”.

In the now popular book ‘India’s biggest Cover-up’, writer Anuj Dhar claims, “The Government of India has a proper approach towards storing, moving and destroying classified files…..With that being the true state of affairs, it can be easily inferred that the disappearance and destruction of Bose-related records could only be the result of a conspiracy hatched by those within the government”.

The Modi government had classified some of the documents related to the iconic leader in 2016.