He engages in cleaning the Vembanad Lake despite his physical challenges for years, spends a full day collecting waste for a living as well as to save the environment. 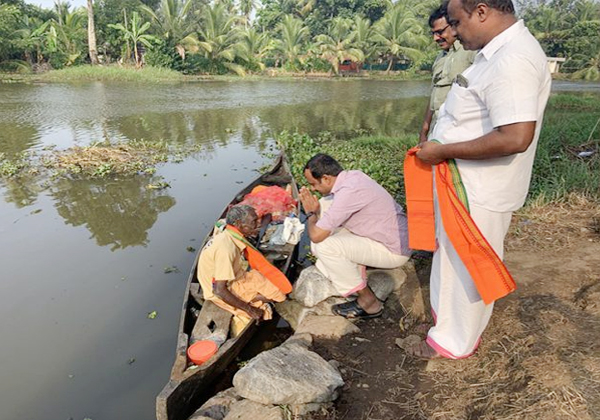 Prime Minister Narendra Modi on Sunday appreciated a differently-abled elderly man from Kerala for his contribution towards cleanliness.

During his radio monthly programme ‘Mann ki Baat’, PM Modi said, “I have seen one more news from Kerala which reminds us of our responsibilities. There is a Divyang elderly person in Kerala’s Kottayam, NS Rajappan. He is unable to walk due to paralysis. But his commitment towards cleanliness has not faded.”

“For the past several years, he rows his boat in the Vembanad lake and clears all the plastic bottles. Imagine how highly he thinks! We must also take inspiration from Rajappan ji and contribute towards cleanliness as far as possible,” he added.

69-year-old NS Rajappan has been on a mission for the last six years. He cannot walk as he is paralysed below his knees; he uses his hands to move around. He lives in Manjanikkara in Kerala’s Kottayam district.

For over half a decade, Rajappan has been collecting plastic waste from the Vembanad lake and other streams of Kumarakom in Kottayam district. He would hire a small country boat and venture out to collect plastic everyday, early in the morning; he would manoeuvre using a stick or his oar. He mainly collects plastic bottles that were dumped in the waters.

“I won’t get much from this. A boat full of plastic bottles will be less than one kg. For a kilogram, I just get Rs 12. But somebody should remove the waste from the water. I have been living around these waters my entire life. I am doing what is possible for me,” Rajappan says.

For him, rowing a boat is easier than moving through the roads. That is also one reason he chose this job.

“I knew to row a boat earlier. I would like to get a bigger boat of my own, so that I can spend some more time and cover more areas to collect the plastic,” he shares. He would collect the plastic, clean and dry them and neatly organise them into sacks. “Maybe after two or three months they (a local agency that collects the plastic) would come and take them and pay me,” he explains.

Rajappan lives in a partially destroyed small house alone. His sister, who lives nearby, provides him food. “The house was in better condition earlier. But in the floods two years ago, it all got ruined. During the time of the floods, I was living in a big boat here,” Rajappan recalls.

Rajappan got poliomyelitis when he was a child which subsequently paralysed his legs. “I did whatever job I got. I couldn’t do regular, daily wage work as my health did not permit me. So I had to find small jobs suitable for me,” Rajappan says.

After the coronavirus-induced lockdown was announced, the plastic waste in the waters has reduced. Rajappan is happy, though this meant his income reduced considerably. As there are no tourists, he says that the waters are mostly clean. “Earlier, I used to get a lot (of plastic). But these days it’s very less. It is good. But my livelihood is in trouble. However, somebody will help,” he adds with hope.

For many years, it has been a common sight for locals to see Rajappan rowing in and around the Vembanad lake with his tiny boat. Many thought he would be fishing. Recently, photographer Nandu KS from Kottayam published a small video of Rajappan’s work for his YouTube channel, which went viral on social media.