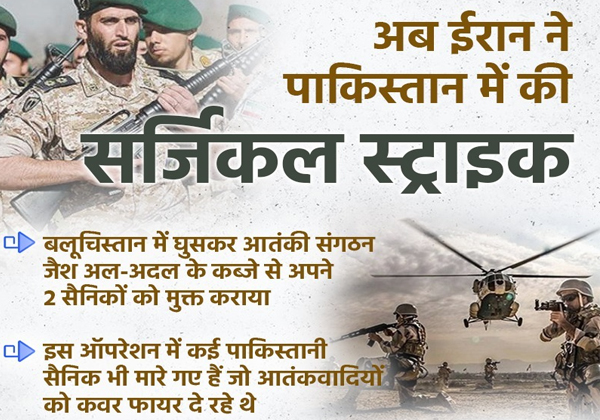 New Delhi: Iran has reportedly become the third nation to carry out a successful surgical strike operation deep inside Pakistan targeting the terror groups and freeing two soldiers who were taken hostage nearly three years ago.

As per reports, the operation was carried out at night on February 2nd without any prior knowledge to the Pakistan Military units deployed in the region, killing several army officials who were allegedly safeguarding the terror groups. Iran’s elite Revolutionary Guards (IRGC) have reportedly done an intelligence-based Special Ops Deep in Pakistan freeing two of its own soldiers. The operation was carried out inside the Pakistan controlled territory.

Reportedly Iran’s elite Revolutionary Guards has also hailed the mission as “successful” and said in a statement on February 3 that on Tuesday night the two kidnapped border guards were even rescued. They were taken as “hostages” by Jaish ul-Adl organization two and a half years ago but owing to the surgical strike. The IRGC soldiers have now reportedly returned to Iran.

As per reports, at least 12 IRGC guards were taken hostage to Pakistani territory in the city of Merkava in Sistan and Baluchestan Province on the border between both the nations, by Jaish ul-Adl organization on October 16, 2018. Following the incident, military officials had formed a joint committee between Tehran and Islamabad with an aim to free the IRGC guards. While five of them were released on November 15, 2018, another four Iranian soldiers were rescued by the Pakistani army on March 21, 2019.