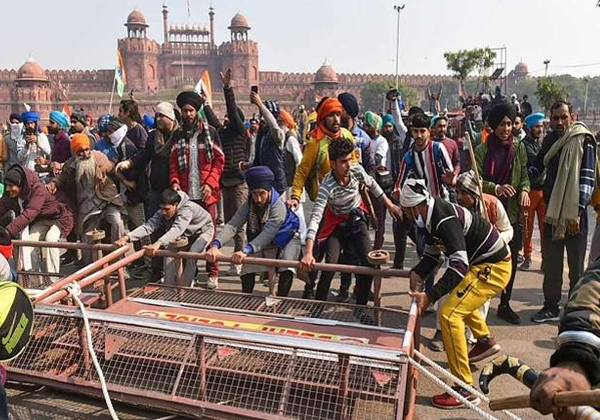 Sidhu has been accused of inciting violence and leading protesting farmers with their tractors to breach the Red Fort, where a religious flag was unfurled by a group of individuals on Republic Day.

The Delhi Police has announced a cash reward of Rs 1 lakh for information leading to the arrest of Deep Sidhu, who has been missing since January 26.

The police have also announced Rs 1 lakh cash reward each for information on Jugraj Singh – who had climbed the flagpole at the Red Fort and unfurled a religious flag – Gurjot Singh and Gurjant Singh.

Further, Rs 50,000 reward each has been declared for information leading to the arrest of Jajbir Singh, Buta Singh, Sukhdev Singh, and Iqbal Singh. All of the eight people allegedly played a role in instigating the January 26 violence in the national capital.

This development comes a day after the government informed Parliament that farmers carrying out Republic Day tractor parade in Delhi had “aggressively” indulged in rioting, vandalising property, and resorting to “criminal force” against police personnel.

In a written reply, MoS Home G Kishan Reddy said that large convoys of farmers in tractors attempted to furiously enter into the capital and go past police barricades, which left no option with the Delhi Police but to use tear gas, water cannons, and mild force to control the rioting crowd.

“They aggressively resorted to rioting, damage to government property, and used criminal force to deter public servants from the discharge of their duty, thereby inflicting injuries to the on-duty police personnel,” Reddy said.

The most shocking act during the farmers’ tractor rally on January 26 was when a group of farmers allegedly led by actor-turned-activist Deep Sidhu breached the Red Fort and hoisted the ‘Nishan Sahib’ and the Kisan Union flag atop the Red Fort’s dome and the Khalsa flag on the flag pole. While the Indian tricolour remained hoisted atop the national monument, most parties have condemned the violence but questioned the Centre on the failure of law and order in Delhi. This act led to several Kisan unions to withdraw from the protest and alleged Delhi locals stage a protest on city borders against farmers.