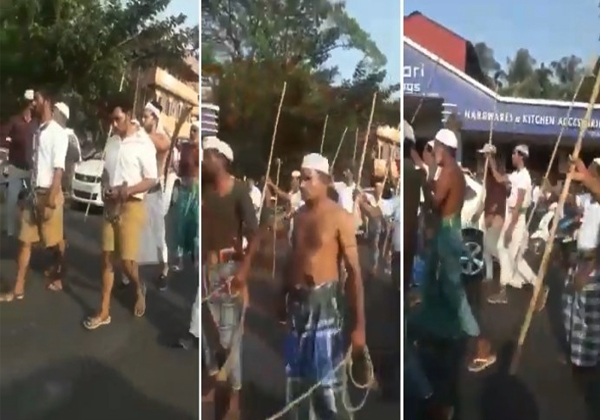 In a shocking rally carried out by the Islamist organization, the Popular Front of India (PFI) in Kerala, people dressed up in RSS uniform were paraded in chains. The audio and visuals from the rally confirm Islamic chantings, including ‘Allahu Akbar’, ‘la ilaha illallah muhammadur rasulullah’, and others. The rally was held in Thenhipalam town in the Malappuram district of Kerala, and the video shows the procession passing through Chelari.

Throughout the rally, there were calls made to chain RSS members. The rally also had people dressed as British officers, chained and tied with ropes, with the other end of the rope held by people in skullcaps and lungis. The RSS and British dressed people were followed by a large group of people holding lathis, dressed in skullcaps and lungis.

2021 marks the centenary year of the 1921 Moplah riots where Hindus were brutally massacred by Islamic fundamentalists. From this rally organised by PFI, it is quite evident that the Islamist outfit could carry out more such rallies to disturb communal harmony and incite hate between the two communities.