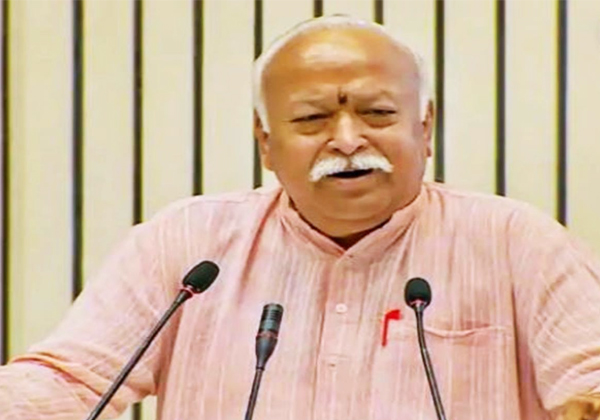 Speaking on the book launch function, Dr Mohan Bhagwat said today’s world and younger generation are in extreme need of our traditions. “We have to show the world that in spite of all diversities in language and religion, we are living unitedly. He said “Bharat has so many states, different literature in every language and teachings of various sects and different views from various provinces. We could be conflicting different also. However diverse we may appear to be, we are all one. That unity has to be realised and strengthened. It is needed to have a duty to give this knowledge to the world which is stumbling in the dark”. RSS Sarsanghchalak said, “Bharat’s culture and traditions are role model for the universe. We can correct or rectify our mistakes only when we recall our forgotten glorious past. Bharatiyas are known for their amnesia, which has landed them in several problems. Remembering or recalling trait of the past is paramount. It will help us to rectify or avoid mistakes. We have not following spirituality and nationalism the prime reason for the same. Our Vedas, ideologies and thoughts are common to universal. There is no compulsion that a particular religion only should follow them. This freedom helped Bharat culture remains a role model for the entire world. If we know whom are we and understand our culture and traditions better, then only we can protect the world and the people around us. Indian Cultural ethos only underscore this concept”.

Dr Bhagwat earlier released a book titled “ Mannil Vilantha Magathana Sinthanai ( A Great thought that grew from the earth) at Coimbatore Ramnagar Ayyappa Pooja Sangam Hall. Dr Bhagwat said, “ This book of Shanmuganathan is like a walking stick for observers. By reading this book we can come out of the dark that encircled us and see the world. In modern days youths have a strong craving for things that are destroyable or impermanent. Youth’s contribution is needed to redeem our glorious culture and traditions. When we read Vedas and Puranas, our wisdom (seventh sense or analytical ability or inner eye) will open up. People who do not believe in God are ready to work with as agreeing all are equal concept. That is the only for people with diverse beliefs come forward to join the mega Nidhi collection for Ram Mandir. The response was so tremendous beyond our expectations. Sathyam (Truth) Ahimsa ( non-violence) are noble traits of a man. When we nurture a feeling that all are the same, these noble traits will remain with us. That will go in search of wisdom. I want this book should be translated in English for the benefit of non-Tamil knowing people. Former RSS TN chief RVS Marimuthu presided over the function. RVS Educational Trust Kuppuswamy and Manickam Atthappa Gounder received the first copy. Shanmuganathan spoke accepting felicitations. He in his address said that there were Chinese and Greek philosophies. But our philosophies, Culture are entirely different them. “ Our culture urges God is within us. We have to imbibe this mindset which can be gained by reading Vedas, Puranas and Epics and its guidance. Professors Gnana Bhoopathy and Chandran gave the introductory talk. Indu Makkal Katchi founder Arjun Sampath also attended book launch event. Book publisher Velayutham proposed a vote of thanks.

He said “we are getting overwhelming response. Even those who opposed it for political reason are now helping us. Lord Ram is in the heart of everyone is the reason for this change. Donations for the construction of Temple Lord Ram is pouring.” Dr Bhagwat arrived in Coimbatore on the 17th afternoon.