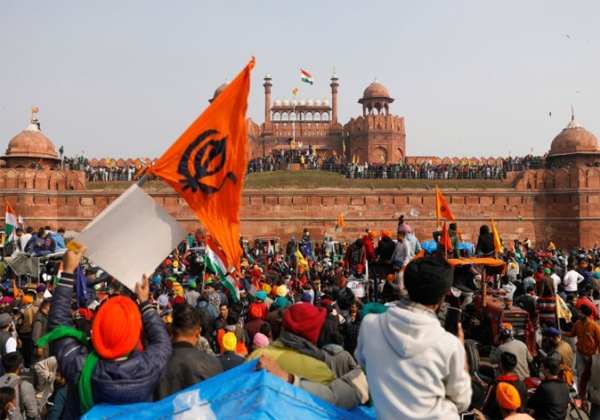 A complaint has been lodged with the DGP of the Delhi police against Malayalam news channels Manorama News, Media One and Reported for ‘exhorting and glorifying violence including acts of extremist organisations in which they made attempts to destabilize and overthrow the democratically elected Central Government.’ The complainant pointed out that, ‘Manorama News and Reporter TV news channel actively facilitated the actions of sedition and waging war against the Nation by continuously giving news factually false news, exhorting, encouraging and glorifying it.’

The complainant also said that “Manorama news in its news report by its Delhi bureau chief Sawad Muhammed called the hoisting of religious flag in the red fort after attacking security forces as “capture of Delhi” The same channel and reporter thereafter goes on glorifying the action of raising a religious flag in Redfort which he describes as a symbol of Nation to be a brave and valiant act and justifies it as a rightful reaction to the atrocities committed against the farmers by the Government .”

Citing the attempt by channels to run a piece of fake news saying that a farmer was shot dead by the Delhi police, the compliant elaborated that, ‘The aforesaid news channels falsely reported that one of the agitators was shot by the police on the head and he expired on the spot while riding the tractor rally during the protest. It is clearly evident that such news (fake news) at that fury moment may fuel riots of large scale as people may believe that the news reported is right’.