Only Bharat can guide the world – Dr. Mohan Bhagwat

"The world is suffering for more than 2000 years now and only Sanatan Dharma can heal it". 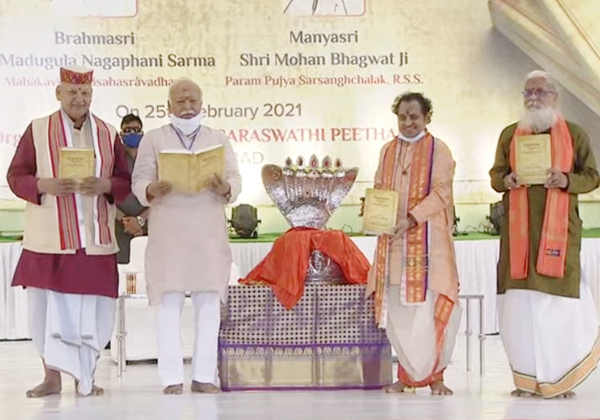 Bhagyanagar: “Hindu society is that which lives by the principles of Dharma. And it is Bharat which can guide the world on the right path,” said RSS Sarsanghchalak Dr. Mohan Bhagwat.

He was speaking after releasing a book ‘Vishwa Bharatam’ written by Dwi Sahasravadhani Dr. Madugula Nagaphani Sharma at Hitex in Hyderabad.

Lord Shiva bore deadly poison in his throat and saved the world, Dr. Bhagwat reminded the gathering, and said that the world nations are now recognizing that it is Bharat which can save them from different vagaries, catastrophes and disasters.

Every task that we take up with devotion and dedication will be a success, he said. Since the day Pakistan and Afghanistan got separated from India, which is the focal point of Dharma, it is apparent they have been in turmoil and unrest. Though Jawaharlal Nehru and others had insisted that the nation would never be divided, it has happened, Sarsanghchalak said, and evinced hope that the divided lands will one day reunite into a single nation.

Earlier, Sri Nagaphani Sharma explained the significance of today’s programme and said that there was a time when Bharat Dharma was prevailing across the globe and it is now the responsibility of every single person to protect such a great Dharma.

Dr. Mohan Bhagwat first visited the Saraswati temple in the complex and performed Pujas. He participated in the Homam being performed at the temple and offered Purnahuti. Then he reached the venue of the book release. The book was released by the Sarsanghchalak after prayer and lighting of lamp.

The programme ended with felicitation of scholars and a Vote of Thanks by Dr. Nagaphani Sharma.