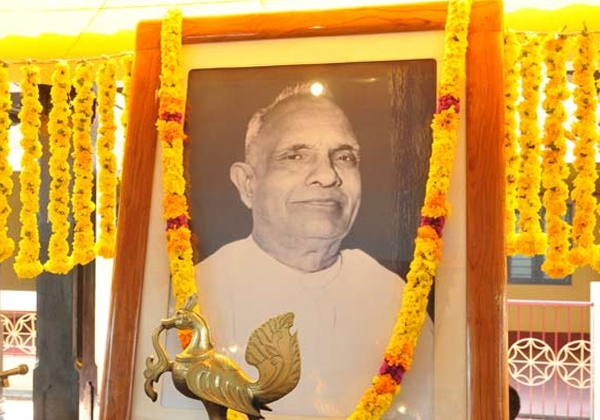 Bharat Kesari Mannath Padmanabhan, a social reformer and a Hindu unifier who holds a respectable position in Kerala’s modern history. He was born on January 2nd 1878 in Perunna (Kottayam district) to Easwaran Namboothiri and Mannathy Parvathy Amma. Throughout his life he fought against social injustice, actively took part in the freedom movement and stood for Hindu unity. In 1914, he founded the Nair Service Society to uplift the Nair community, ruined by social practices like Sambandham and Marumakkathayam.

In 1924, he actively took part in Vaikam Satyagraha to allow backward communities to use roads adjacent to the famous Vaikom Mahadeva Temple. He led ‘Savarna Jaata’ from Vaikom to Thiruvananthapuram in solidarity with the backward communities. Along with R Shankar, a prominent Ezhava leader, he founded Hindu Maha Mandalam to unite both Nairs and Ezhavas who were segregated by the caste hierarchy. Efforts were made to integrate the activities of the Nair Service Society (NSS) and Sree Narayana Dharma Paripalana Yogam, but it couldn’t achieve the said target.

He maintained a cordial relationship with Guruji Golwalkar. While felicitating Guruji at his 51st birthday celebration in Thiruvananthapuram, Mannath Padmanabhan Said, “RSS is the only effective cure for the lack of strength and organisation and the consequent cowardice and wretched state of our Hindu race. Every village of Kerala must proudly possess a Shakha of the RSS is the only true countrywide national organisation. Had I been younger, I would have gladly participated even in the physical activities of the RSS”.

To reaffirm his commitment towards Hindu unity, the first college built by NSS was named the NSS Hindu College. In 1959, he lead the opposition in its fight against the Communist government through protests known as Vimochana Samaram (liberation struggle) and later the state government was dismissed by the centre. The same year he was conferred the position of ‘Bharat Kesari’ by the Indian president. In 1966 he was awarded Padma Bhushan for his services to the nation. He also the vice-president of the Vivekananda Rock Memorial Committee.

The Left-wing historians of Kerala, have always sidelined the legacy of Mannath Padmanabhan. They try to brand him as a caste leader only. But in reality, he was a Hindu leader, a social reformer and a visionary with the courage to fight against oppressive forces.

Union Home Minister Amit Shah too remembered iconic social reformer Bharatha Kesari Mannathu Padmanabhan on his Jayanti, stating that “he fought for social equality and revived the old concept of village societies. His pioneering role in India’s freedom struggle and welfare of the downtrodden will continue to guide us.”

Meanwhile, Bharatiya Janata Party National President, JP Nadda tweeted, “I bow to visionary social reformer and freedom fighter, Bharatha Kesari Mannathu Padmanabhan on his birth anniversary. He dedicated his life in the service of downtrodden and bring positive changes in the society which is inspiration for all.”