Murder of RSS worker at Vayalar, a Jihad with the support of Left 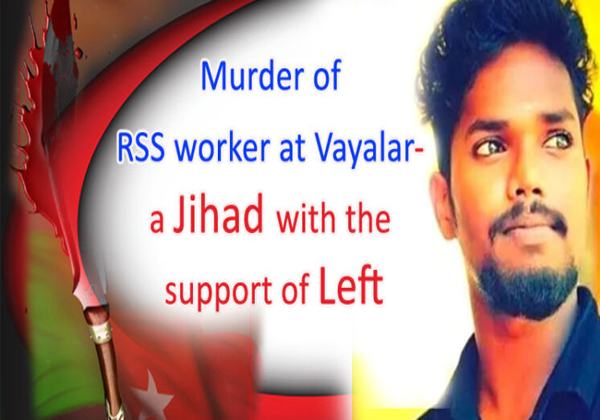 The murder of RSS worker Nandu, at Vayalar Nagarkulangara near Cherthala in Alappuzha district of Kerala is being revealed as preplanned. The assassination was carried out by SDPI (The political facet of Popular Front) extremists after making provocative speeches and creating an atmosphere of tension and attacking the house of RSS worker. It was in this area that the accused in the murder of SFI activist Abhimanyu was given protection. The accused in the murder of Nandu is also the person who helped Abhimanyu’s murderers to hide. This homicide was caused by the police’s inaction in bringing to law the SDPI perpetrators and those who helped hiding them following the Abhimanyu murder case.

Nagarkulangara is a Hindu-majority area with a famous Naga Temple. There are only ten or twelve Muslim families there. The RSS has been operating there for the last 42 years. There was no communal or religious problem. Hindus and Muslims lived in harmony. But this has changed in the last four or five years when  a muslim religious preacher named Abdul Qadir  and his sons became SDPI activists and Muslim extremists from outside began to settle here regularly. They started giving speeches, demonstrations and other activities that created communal tension. They started a shopping complex and turned its upstair room into an illegal Mosque. Locals say the Salafi mosque has become a breeding ground for militants and a weapon training center. The accused in the murder case of SFI activist Abhimanyu were kept in hiding by the SDPI here. Ashkar, one of the suspects in that, was arrested by the police in connection with this murder case. Rafeeq was one of those who lit the saffron flag and propagated it through his mobile phone.

Their aim is to destroy the atmosphere of peace in Nagarkulangara. Recently, they went to the house of RSS Mandal Baudhik pramukh Prasad and challenged him. Following his complaint, the police reprimanded them and asked not to repeat such incidents and downplayed the case. SDPI activists from Vaduthala, Arukutty, Chandru, Cherthala and Nedumbakkad came here and caused trouble.

The provocative demonstration by SDPI during the recent visit of UP Chief Minister Yogi Adityanath in Malappuram district as part of a state-wide protest had become controversial. Though there were no tabloids of Hindu geneocides of 1921 during the last day’s demonstration at Nagarkulangara, provocative slogans were raised. Most of the protesters were from outside. The next day,  BJP workers protested. After the demonstration, the activists dispersed and the SDPI men arrived by car and bike from outside and started abusing. They went to Prasad’s house and assaulted him. Swayamsevaks from the shakha arrived. On their way back, the SDPI men tried to attack them at the junction and  stones were thrown at swayamsevaks.

During the altercation, the sdpi criminals took weapons, including a machete, from a vehicle parked below the mosque and stabbed Nandu on his head, who was nearby. When Nandu was hit on the head, his hand was cut off as he tried to block attack by his hand. Swayamsevaks seized weapons from the attackers but by that time the attackers  got into the car and escaped. All this time, the police tried to stop sangh workers. In effect, the police collaborated with the attackers and paved the way for their escape.

The incident in Cherthala confirms the allegation that Islamic extremists are carrying out jihad in Kerala with the help of the Left government. The death of this innocent man was prompted by the government’s unwillingness to take seriously the move of Muslim terrorist organizations to deny Hindus a peaceful life, even in Hindu-majority areas.