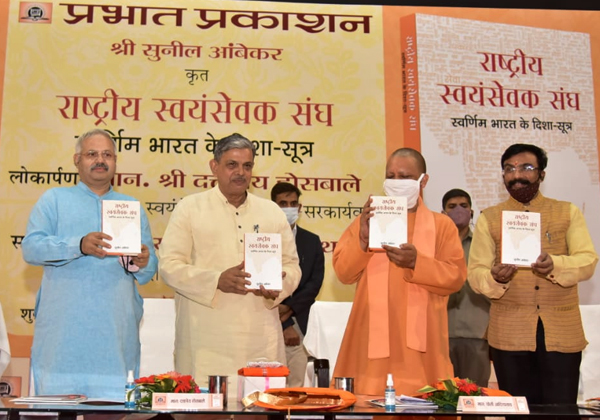 Lucknow: Uttar Pradesh Chief Minister Yogi Adityanath on Friday called upon the people to observe the service sense of Rashtriya Swayamsevak Sangh (RSS) for understanding this unique organisation. He said that RSS is a visionary organisation.

Yogi on the occasion recalled the services of RSS Swayamsevaks during CORONA crisis. He also recalled the contribution of Sangh during Prayag Kumbh held in 2019.

Earlier, senior scribe Narendra Bhadoria and Director, Govind Vallabh Pant Institute Badri Narayan narrated about the book. They said that this book is not only documentation but also gave a vision and imagination of RSS for India and almost all the sector of Indian society.

The author of the book Sunil Ambekar on the occasion said that the book is an effort to answer the querries that normally come from the people. It may be mentioned here that Sunil Ambekar had earlier written a book titled, ‘The RSS-Roadmaps for the 21st Centuary’ in English and it was released by the Sarsanghchalak in 2019. The book to be released on Friday is the Hindi version of his earlier book.

Earlier, he had been national organising secretary of the Akhil Bhartiya Vidyarthi Parishad (ABVP), student wing of RSS for several years. His book ‘Rashtriya Swayamsevak Sangh-Swarnim Bharat ke Disha Sootra’ is considered to be an effort to showcase the Sangh as a more forward looking organisation.

This 272 page book has been divided into 10 chapters. It describes the imagination of RSS for India and deals the issues related to the journey of Sangh and its Shakha system, caste issues, family, globalisation, social justice and women issues etc.

Prominent among those who were present during the book release function included Sah Sarkaryavah of RSS Dr. Krishna Gopal, Kshetra Pracharak Anil, and others. Vote of thanks were given by Narendra Singh while Prabhat Kumar of Prabhat Prakashan conducted the proceedings.