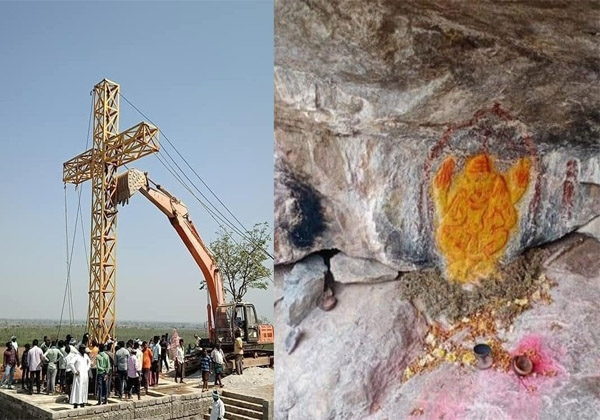 Andhra Pradesh: The Christian Missionary mafia in Andhra Pradesh has erected a huge cross on top of a hill in the mining village of Edlapudu of Guntur district by violating laws of the land. As per the locals, this hilltop is known as Sita Paduka (Footprints of Sita Mata) where Hindu devotees perform weddings since a long time.

Since this hilltop of Edlapudu village falls into the Amaravati Capital region of Andhra Pradesh, the missionary mafia have conspired to create a new landmark with a Christian symbol that is intended to influence the public psyche towards Christianity.

The Christian missionary mafia accelerated its activities in the state, since YS Jagan came into power. In this case, the members of Church in connivance with District Magistrate Samuel, who publicly assured to extend support to any Christian issue, has deliberately ignored their encroachment of this mining hill. It is suspected that with lot of secrecy, on the hill top, the missionaries even damaged the footprints of Sita Mata, dug up the entire hill (the backside has a carving of Narasimha Swamy) and levelled the area and finally installed a huge cross.

As per Legal Rights Protection Forum, BJP activists made a complaint to District Revenue Divisional officer about the ongoing encroachment and preparations for unauthorised construction of church and plans to put a huge cross. They have also cited the various laws that are being violated by these perpetrators. However, this complaint was put aside without any action that resulted in a complete encroachment of hill by the law breaking conversion mafia.

Occupying public places, creating new Christian landmarks, advertising them as holy sites, calling it with Biblical names, then renaming with entire village is the standard modus operandi of this Christian mafia.