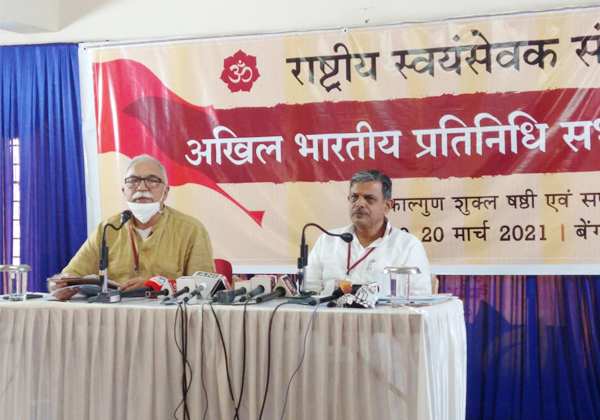 Addressing a press conference today at Jan Seva Vidya kendra in Bengaluru, RSS Sarkaryavaha Dattatreya Hosabale said that the organisation will work towards inculcating Family Values, Environmental issues and Social Harmony in the next 3 years. He was speaking at the press conference on the concluding day of the 2-day ABPS meet.

Beginning the press conference, Akhil Bharatiya Prachar Pramukh of the RSS Shri. Arun Kumar ji appraised the media about the proceedings of the 2 day meet. He informed the media that the election for the position of Sarkaryavaha was held during the meet. Present Sarkaryavaha Suresh Bhaiyya Ji Joshi expressed that given his advancing age he wished to see someone younger to take up the responsibility and guide the organisation across the country. Accordingly, the name was Shri. Dattatreya Hosabale was proposed at the meet and was unanimously elected by all the members, he informed. Shri Arun Kumar then gave a brief introduction to the life and work of Shri. Hosabale.

Shri Arun Kumar said that the delegates of the meet deliberated on the Sangh work in the last 3 years and also planned for the next 3 years. Resolutions were also passed on culture, environment and societal issues he said.

Addressing the media, the newly elected Sarkaryavaha in his opening remarks reminded that the the ABPS was not held last year due to the Corona Pandemic. He said that today the entire society is well aware of RSS’ work and more people in India and the world are interested to know more about he Sangh. Recalling the lockdown due to pandemic, he said that Swayamsevaks had to stop the Shakha during the time. As every citizen was expected to follow the restrictions, Sangh swayamsevaks too dutifully adhered to the lockdown norms. But this gave them an opportunity to explore new ways to serve the society. During the pandemic they served everyone in the society through various means like distributing ration and many other tasks. Just like during any other calamities, the Swayamsevaks were not deterred by the situation and served the society without fear or fervour. A resolution was passed by the ABPS to commend and thank the entire society.

The ABPS resolution commends the entire country for the resilience shown during the pandemic. This includes the governments, its agencies, organisations, people all who stood as one to fight against the pandemic. Entire India stood united and found exemplary success. Though we are still amid the pandemic, the way the country responded in fighting the corona is praiseworthy. The country showed its innate strength, its power, adaptability and its concern despite hardships. It was this attitude that enabled the country to manufacture ventilators and PPE suits in short time and even export it across the world. Everyone worked beyond the call of duty and our policemen, doctors, nurses, safai karamcharis, all worked to defeat the virus. The work done by will serve as an example to the future generations. This exemplary work during the pandemic has to be documented. It is not one organisation or just one agency which worked but the entire society which came together for a caus. There is still a need to adhere to the suggested norms by the govt and hence only 1/3 of the total expected delegates are here. We hope that the country and the world are out of the pandemic soon. We have again shown and established the age-old Bharatiya ethos of ‘Vasudaiva Kutmabakam’ by dispatching medicines during and after the pandemic he said.

The other resolution was over Ram Mandir Nidhi Samarpan Abhiyan. The Ram Mandir construction ceremony was held adhering to all the norms where the PM, RSS Sarsanghachalak, Trust members and others participated. It is obvious that the construction requires donations from the people. It is in this respect that the Mandir Nyas decided to approach every citizen of the country. The campaign was planned for 44 days. Every section of the society was part of the abhiyan and the outreach program of this kind is unprecedented anywhere in the world. It was a historic campaign with no parallel. 12 crore families have been contacted and 5.5 lakh towns, cities and villages were reached. It went on smoothly. Swayamsevaks of RSS and common people were part of the campaign. Even those locations where Swayamsevaks could not reach due to some reason, people themselves came forward and donated for the cause. We have heard many interesting stories from across the country from the delegates during the ABPS. The campaign established that every Bharatiya is connected to Bhagwan Ram. From the richest persons to the poorest have contributed to the Ram Mandir in their own way, he said.

RSS Sarkaryavaha on Sangh focus areas in the next few years

RSS will be completing its national service in the year 2025. RSS has planned to reach every mandal in the country. Due to the corona, RSS could not hold regular shakhas. Since November, regular shakhas have begun wherever the situation was conducive and no restrictions were in place and by following all the norms suggested by the govt.

Informing the media about the presence of Sangh in the country, the Sarkaryavaha said that shakhas are present at 34,569 locations in the country. 18500 weekly assemblies (Milans) are happening across the country. A total of 55652 daily shakhas are happening. 90% of the shakhas have restarted. As colleges and schools are closed now not all student shakhas have restarted. But as soon as the conditions become normal, we will resume all the shakhas. RSS shakhas is present in 58542 mandals and in 5505 in khands/developmental blocks in the country. We plan to reach all the mandals in the next 3 years.

Sangh will work in the cultural and other aspects in the next few years. This will be in social harmony, environment, water conservation, parirvar prabodhan to inculcate family values, etc. RSS will work towards uniting the entire society by resolving all differences. RSS will also work toward Gram Vikas to ameliorate our villages. RSS will work with many other orgs and trust to improve the quality of the soil as the quality of the soil is going down due to various reasons. Soil experts have suggested various ways to improve the situation. RSS will take it up as a large campaign with pilot projects in this regard from April 13. RSS will work on all these dimensions in the next 3 years.

Bharat has a narrative of its own and has a unique civilizational wisdom that cannot be wished away. This along with its civilisational experience and its achievements have to be conveyed to the world and the next generation. An intellectual campaign towards this will be taken up by the RSS in the next 3 years. The experience of our Karyakartas is the inspiration behind the sangh work in these 3 dimensions in the next few years. We expect cooperation from the society and people of the country.

Q: Many in the country including few political parties have been targeting the RSS over one or the other issues. How do you counter their charges?
Ans: There is democracy in the country and they are free to express their opinions. It is wrong to say that the government is controlled from one place. The entire country comes together for a cause whenever needed. For example, during the Ram Mandi Abhiyan, every section of the society became part of the campaign. Not just Hindus, even people of other religions wilfully became part of the campaign. Moreover, the Ram Mandir judgement was passed by the Supreme Court which was has to be adhered to. The SC ordered to form an trust which was formed as per the judgment. The entire country is part of the campaign and those who comment against the campaign is due to their own political compulsions and they may not mean that in person.

Q: There has been an increase in targeting the Sangh during the last few years and most issues facing the country are conflated with the RSS. Example, the comment of Uttarakhand CM on women attire was linked to the RSS. How do you respond?
Ans. Those who have been asked the questions are capable of answering them. It is not that everything in the country happens due to RSS. There is no reason to bring in RSS in all allegations. Whatever RSS does in the society, it does in the open with the knowledge of all.

Q: Head of Pejwar Matha recently commented that girls of the Brahmin community should not marry outside their caste. RSS says it works for a discrimination free society. So how does it view his comment?
Ans: I am not aware of the context and the entire text of what Pejawar shree has said. Pejawar shree himself has worked towards untouchability in the past. As far as RSS is concerned, it will worked towards a society which is bereft of all differences in caste, community, etc. RSS as it always has will work towards a untied society. RSS does not consider caste and other differences as is evident in its working.

Q: Questions are being raised on continuation of reservation in the country. What is RSS’ take on the issue?
Ans: RSS has said time and again clarified its stand on the issue. It is of the opinion that reservations have to exist as long as it is required in the society. RSS has also passed a resolution on the same. Our constitution too says that reservations are required as long as differences exist in the society and RSS conforms to the same.

Q: What is the view of RSS on Love Jihad?
Ans: Karnataka and Kerala High Courts have confirmed the practice of love jihad. The use of fraudulent methods to lure girls for marriage and conversion is condemnable and it has to be opposed. Suitable laws and regulations have to brought and RSS will support such laws.

Q: How does RSS view the role of youth in the future?
Ans: RSS is a nationalist organisation and not a religious organisation. Youth are increasingly joining RSS and its societal work. There is renewed hope in the country and the youth are joining the nation building efforts in large numbers. India has to be a self-reliant and strong nation and attain a covetable place in the comity of nations in order to serve humanity. The age-old Bharatiya ethos is reflected in the saying ‘Atmano mokshartham jagat hitaya cha’ which is also the ideal of RSS. This must also be the goal of youth.

Q: There were differences between RSS inspired organisations and the government on various issues like the Labour laws. Will the RSS question and challenge the BJP?
Ans: The RSS takes a stand based on the issue and the situation. The stand of the RSS will always be in the best interests of the nation and the same will be expressed as required. This has been the practice and will continue as such.