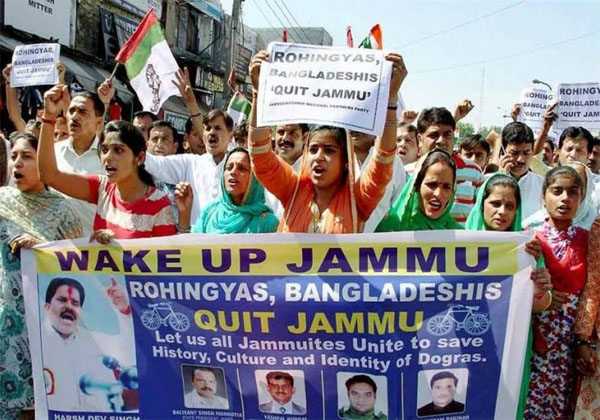 New Delhi. As the union territory of Jammu & Kashmir readies to deport illegally staying Rohingyas in Jammu to Myanmar, a petition against the move was filed in the Supreme Court. On Thursday, the SC began hearing of a petition seeking stopping the deportation of over 150 Rohingya refugees in Jammu and Kashmir. The petition is being heard by a bench headed by Chief Justice SA Bobde.

The United Nations through its Special Rapporteur, E Tendayi Achiume sought to assist the court in the case concerning deportation of Rohingya refugees. In her plea, Achiume had stated that mass deportation of Rohingyas is impermissible under international human rights law and India must carry out due process obligations necessary for protection of each individual’s human rights, as per the findings of UN on the treatment of the Rohingyas in Myanmar.

Honoring the objection, the SC bench declined to hear Senior Counsel CU Singh who was appearing on behalf of Achiume. We will not hear you. Govt has reservations. We will hear you later,” the CJI said. “Your moment is over. There is serious objection. We will see when to hear you,” the Court replied.

The Jammu & Kashmir administration began the process of identifying undocumented immigrants on March 6. Over 150 of them were sent to a holding centre under the Foreigners Act. Officials insist that due process of law was followed and added the immigrants sent to the centre did not carry any valid travel or identity documents.

The petition has been filed by Mohammad Salimullah, a Rohingya refugee, through advocate Prashant Bhushan. It also seeks direction to Ministry of Home Affairs to expeditiously grant refugee identification cards through the Foreigners Regional Registration Office (FRRO) to the Rohingyas in the informal camps.

The Central government through Solicitor General Tushar Mehta opposed the plea filed by Mohammad Salimullah on Friday contesting the claim of the petitioner that they are refugees. “They are not refugees at all. This is the second round of litigation. This petitioner had filed an application (before) and it was dismissed,” Mehta said.

Mehta said that they are illegal immigrants and will be deported as per the procedure established by law. “They are illegally immigrants. We are always in touch with Myanmar and if they confirm so then they can be deported,” Mehta maintained.

Forum for Human Rights and Social Justice, a Jammu based NGO, too has filed an application before the Supreme Court stating that the plea to stop the Rohingya deportation must not be entertained since the settlement of the Rohingyas in Jammu was “a part of a larger design” and an attempt to destablise the country.