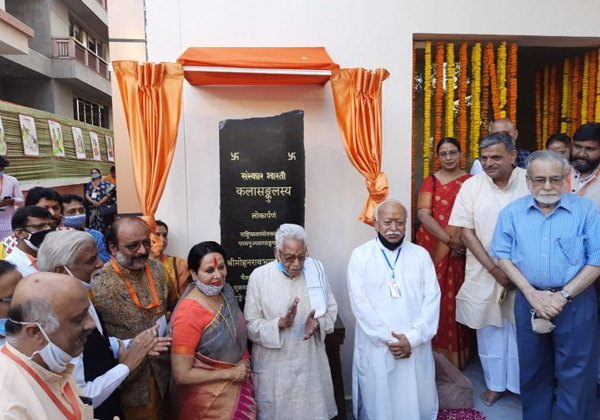 New Delhi : Inaugurating ‘Kala Sankul’, the newly constructed headquarters of Sanskar Bharati, Rashtriya Swayamsewak Sangh Sarsanghchalak Dr. Mohan Bhagwat said the Bharatiya art is not merely a medium of entertainment, it is an expression of divinity within mankind. Since the west merely chose the colours as the medium of art, its art is incomplete and they are still wandering around in search of actual happiness. The west today looks towards Bharat to attain real happiness, because Bharat reaches the roots from where the feeling of happiness actually arises. Building a capable society through art is the goal of all of us.

Renowned theater & film personality and Chairman of National School of Drama, Paresh Rawal, presided over the inaugural ceremony through online mode, as he was COVID positive. Patron of Sanskar Bharati, Baba Yogendra Ji, was also present. Earlier, this event had been planned at massive level in Vigyan Bhawan and all the preparations for it had been completed, but the programme was postponed following government’s fresh advisory on COVID-19 pandemic.

“All Bharatiya art forms help a man attain peace and harmony in thoughts and action. Not only the art forms, but all the thoughts originated from Bharatiya roots have the same message. If you really want to perceive Shiva in truth, it must have the element of tenderness, and art is the manifestation of that compassion. It is our duty to preserve this flow of Bharatiya art,” added the Sarsanghchalak. He hoped that the newly constructed ‘Kala Sankul’ would prove to be a centre of taking concrete steps for preservation and promotion of different Bharatiya art forms.

In the beginning, Sarsanghchalak and Sarkaryavah of the RSS Dattatreya Hosabale inaugurated the ‘Kala Sankul’ by lighting the lamp and breaking the coconut. Handprints of the Sarsanghchalak were taken after the inauguration to be framed and preserved at ‘Kala Sankul’.  Celebrity artists Malini Awasthi, Anoop Jalota, Anwar Ali Khan, Sugandha Sharma, Wasifuddin Dagar, Pandit Dharmanath Mishra and Pandit Ramkumar Mishra presented highly impressive ‘Ragadesh’. The inaugural ceremony also witnessed Sanskar Bharti’s four-decade journey and the entire imagination of ‘Kala Sankul’ through a documentary.

Patron of Sanskar Bharati, Padmashree Baba Yogendraji expressed his feelings on the occasion thus : “This Kala Sankul is definitely going to help establish a cultural connection and give a desirable direction to the artists in entire society. Our primary aim would be towards creating an atmosphere of peace, joy, hard work, and devotion in the country. The establishment of this new art and culture centre in Delhi will constantly be on the grounds for nation-building with impeccable art and artisans.”

“Since the formation of Sanskar Bharati as an art and cultural organisation, it had no central office till date. In such a situation wherever the workers and artisans worked that place became our office. Fortunately, now an official workplace for artists has been launched in the national capital. We genuinely believe that through this Kala Sankul, the creation of art, the spread of creative art ideas and the innovative ideas of Sanskar Bharati will tend to flow among the common man like goddess Saraswati throughout the country. Our aim is to awaken the national culture in society through creative and innovative mediums of art,” said national president of Sanskar Bharati Vasudev Kamath.

In his audio message, Paresh Rawal, said: “The most important enterprise dedicated to the field of art and culture for many years, Sanskar Bharati has finally come up with the inauguration of its central office in Delhi. My heart is filled with joy and emotions to be a part of this graceful occasion. When the centre attains stability, the girth expands automatically. Art & culture always spread through the use of numerous communication mediums and in turn all these communication mediums become the mediums for cultural spread all around. I am confident that there will be focused efforts from this central office of Sanskar Bharati in this particular direction in the near future.”

Kala Sankul, the new headquarters of Sanskar Bharati, located at Deendayal Upadhyaya Marg in New Delhi, is a complex dedicated to the activities of art and culture and includes a rich library equipped with art and culture books, an art gallery, auditorium, studio, and conference rooms. It is going to emerge as a renowned centre of art and cultural activities in the country.