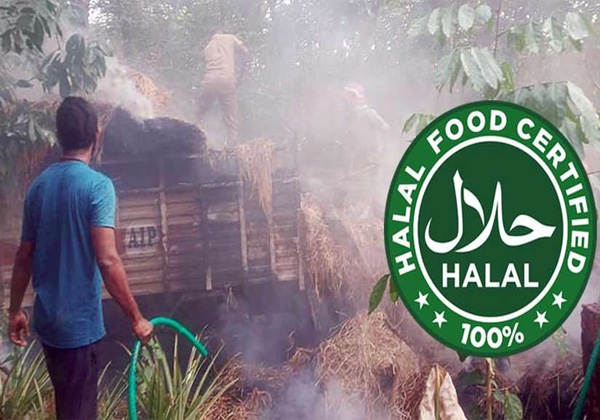 In a shocking incident that happening in Kerala, Islamists attacked a Christian man named Shaji M Varghese for selling non-Halal meat in Meenangadi (Wayanad district). Shaji was forcefully fed raw meat by the Islamists. They also burnt down a lorry owned by Manoj, which was used for the distribution of meat.

A group of farmers called ‘Kisan Mitra’ initiated the sale of fresh non-halal meat on Easter day and this initiative had irked the Islamic fundamentalists in Kerala. It is a known secret that the meat distributed in Kerala is of low quality. The selling of non-halal meat received a positive response from the general public. Islamists fear that more people would prefer non-halal meat and hence unleashed a physical attack on the traders to generate fear.

‘Halal has more financial reasons than religious,’ says Hindu Aikya Vedi as the organisation gears up for public outreach on this Islamic system

Hindu Aikya Vedi is all set to launch a massive public outreach program in Kerala against ‘Halal Branding’ and has decided to approach higher authorities to ban such products and services. Aikya Vedi’s state general secretary R.V Babu has said that halal has more financial reasons than religious and this system eventually results in the monopoly of a particular community. He said, “We have no objection to hotels serving halal food, but things have reached a stage where non-Muslims’ jobs and business opportunities are being threatened because of halal certification.”

R.V Babu also said there is a requirement that one-third of employees should be Muslims to get the certification. “People will be forced to opt for selling halal products to get business and those who refuse will naturally be losers. There are now halal-certified flats and even Ayurveda products. Remember that according to Islam Ayurveda is Haram.” He called the halal system discriminatory and another form of untouchability. He pointed out that untouchability is banned in India according to our constitution.

“This is a recent phenomenon. We are seeing new things that were not here before 20 years. A new system is emerging where food prepared by the members of other communities are being considered as Haram. This eventually results in social unrest and segregation. The concept of halal-haram destroys the communal harmony”, said R.V Babu. “Halal first came to the public domain with the beginning of poultry farming in Kerala. Then this concept spread to the restaurants. Hence, it could also be called a marketing strategy,” added R.V Babu.

“In India Halal certification authority, for example, Jamiat-Ulama-i-Hind trust charges a certain amount as fees from the applicant. They give a portion of this amount as Zakat. Here the interesting fact is that these Zakat is used for purposes that trigger suspicion. It is used for providing legal aid to terror accused people who are currently behind the bars. Every such activity is listed on their website,” said R.V Babu.

Recently, five activists of Hindu Aikya Vedi were arrested for asking a restaurant owner to remove the halal board. Aikya Vedi is planning to intensify protests against halal products in the coming days.