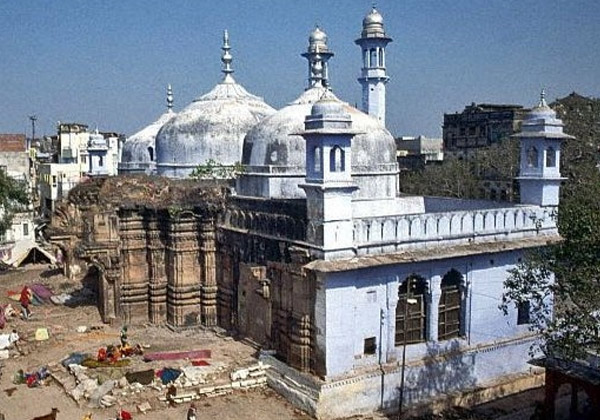 New Delhi/Varanasi: Taking cognizance of a petition by a Varanasi-based lawyer V S Rastogi, a local court in Varanasi on Thursday, April 8, allowed an archaeological survey of the Kashi Vishwanath Temple-Gyanvapi mosque complex.

Rastogi’s petitioner was challenged by the Gyanvyapi Mosque committee. The petitioner had demanded the ‘restoration’ of the land now held by the Gyanvapi Mosque to Hindus, reports said from Uttar Pradesh. It was claimed that Mughal Emperor Aurangzeb in 1664 pulled down a portion of 2000-year-old Kashi Vishwanath Temple to build the Gyanvyapi Mosque. The court also ruled that all expenses relating to the survey are to be borne by the government.

RSS leader Indresh Kumar said, “People from all sides should respect and show faith in the orders of the court of law”
However, a Shia cleric Yasoob Abbas told a television channel: “Our country is a flower bouquet where every community should live in harmony and peace….targeting Kashi and Mathura (by Hindu groups and individuals) after the Ayodhya verdict that went in favour of temple is uncalled for”

He said, “It’s time to talk about development and peace and harmony”.

On November 9, 2019, in one of the most landmark judgements in the contemporary setting, the Supreme Court had ruled in favour of construction of a grand Ram Temple. On August 5, 2020, Prime Minister Narendra Modi participated in a grand religious ceremony and puja to begin the Bhoomipujan for the construction of the Ram temple.

The Gyanvapi mosque a ‘Jama Masjid’ located in the heart of the Varanasi and is administered by the Anjuman Inthazamiya Masajid in the north of Dashashwamedh Ghat, near Lalita Ghat along the river Ganga.

The Hindu groups had earlier alleged that the Krishna Janmasthan Temple Complex in Mathura was dedicated to Lord Krishna. But the temples were destroyed multiple times throughout history and most recently by Aurangzeb in around 1670.

Sometime back, the Supreme Court bench of Chief Justice of India S A Bobde and justice A S Bopanna sought the response of Union ministries of Home, Law and Justice and Culture, on a plea filed by BJP leader Ashwini Kumar Upadhyay against the 1991 Places of Worship (Special Provisions) Act. This law had fixed the “character” of all places of worship prevailing as on August 15, 1947, except Ram Janmabhoomi.

It may be metioned that In April 1984, over 550 Hindu seers from across India along with the Vishwa Hindu Parishad (VHP) leaders at the first Dharm Sansad, or religious Parliament, in Delhi had given a clarion call to press for the “return” of the holy shrines of Varanasi, Mathura and Ayodhya to the Hindus.