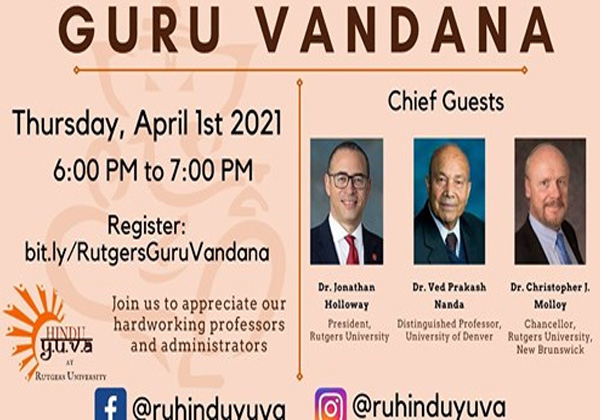 Rutgers Hindu YUVA hosted it’s first-ever Guru Vandana on April 1st, 2021, which had over 500 attendees in total. There were 38 administrators and professors present, who were recognized throughout the event for all their hard work and contributions to the university.

The event started with a melodious Ganesh bhajan/stotram (Prayer to Lord Ganesha) by Rutgers Dhol Effect, as Hindu celebrations begin by invoking Ganesh so that it may happen smoothly and successfully, without any obstacles. This was followed by the ceremony, where we taught the administrators and professors how to wear Kumkum (Red Turmeric powder) and shawls (a piece of fabric) while explaining the significance behind these practices. One of the chief guests for the event, Dr. Ved Prakash Nanda, connected with everyone by sharing his experiences as a Guru and his relation with his Guru. Dr. Nanda’s words made everyone reminisce about their experiences with Gurus and how meaningful it is to have a mentor. President Holloway and Chancellor Molloy were a part of Guru Vandana and shared experiences they’ve had with their Gurus over the years. It was very heartwarming to see all the Rutgers administrators and professors share their encouraging words and extend their
whole-hearted support, while fully participating in the ceremony. The Hindu YUVA team was deeply honored to host all the administrators and professors at this Guru Vandana event.

“There is a saying … ‘If I see my guru and god in front of me, whose feet should I touch first? And the people (say), ‘It will be my guru because my guru is the one who’s going to show me the path to my own salvation.” – Dr. Nanda

“You don’t know where you are in your journey. But if you have a mentor, if you have a guru, you have somebody who can guide you along the way… towards a future you never imagined, but that might be the most fulfilling future you could possibly achieve.” – President Holloway

Hindu YUVA is a socio-cultural student organization based in more than 35 universities across the country. Hindu YUVA aims to provide a platform to preserve, practice, promote, and protect Hindu Dharma by bringing together Hindu youth across college campuses in the United States.