A collective of organisations working on agriculture, environment launched a multi-pronged campaign, Bhumi Suposhan & Samrakshan Abhiyan, to generate awareness on conservation, fortification and preservation of earth. The campaign aims to drive home the message that protection of earth is our responsibility 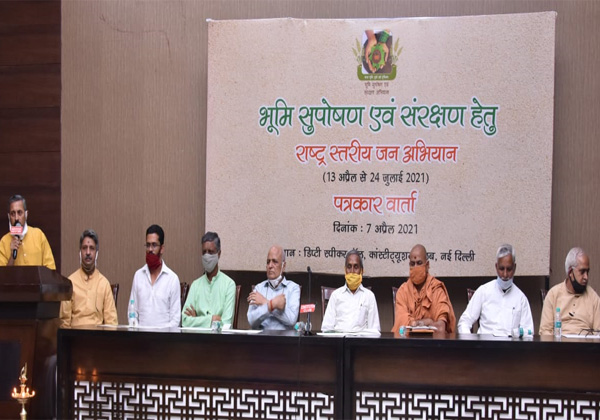 An alliance of organisations, inspired by Rashtiya Swayamsevak Sangh, working in the areas of agriculture and environment will launch a national-level awarenes scampaign, Bhumi Suposhan and Samrakshan Abhiyan, (fortification, conservation and preservation of earth) in April 2021.

This multi-dimensional campaign will compriseof action, awareness generation and advocacy for reinstating the holistic Bhumi Suposhan concept. The initial phase of three months will start on auspicious Chaitra Pratipada, the first day of the new year in traditional Bhartiya calendar. This year it will be on April 13, 2021.

“We have overlooked Bhumi Suposhan for over last 200 years of ‘modern’ agriculture. We have been exploiting our lands as an infinite economic resource. We are extracting nutrients from our lands with minimum reciprocation. Presently 30 per cent of our geographical area is suffering from severe land degradation. As per the experiences of the farmers the input cost in agriculture is continuously increasing, productivity is decreasing, reduction in organic carbon, as a result decrease in production. Additionally, water holding capacity of the land and the water level also is going down. As a result of nutrient deficient landresource, we are observing nutritional deficiencies and related diseases in human and animals,” said Shri Jai Ram Singh Patidar, the national coordinator of the Abhiyan.

It is an appropriate time to retrace our roots in caring for our land. The awareness campaign is a first step towards reinstating holistic Bhartiya Krishi Chintan. According to Bhartiya Krishi Chintan, the land or Bhumi is a living being that provides us all basic needs. In return, we should care for her, replenish her. There are numerous examples in ancient Bhartiya literature that affirm the holistic approach towards tending our lands. For example, माता भूमि: पुत्रो अहं पृथिव्या:  is a verse in the Bhumi Sukta of Atharva Veda that mentions Bhumi is a mother and we are her sons. Thus, Bhumi Suposhan and Samrakshan are ingrained in Bhartiya Krishi Chintan.

The campaign is to drive home the message that caring of land is the responsibility of every citizen. Therefore, it will be conducted in villages and cities alike, all over the country.

The campaign is an outcome of an extensive consultative process implemented in the last four years. It includedamong others, one to one consultative meetings with farmers and agriculture scientists, writeshops, regionalmeetings and a national conference on Bhumi Suposhan in January 2018. The Abhiyan is a joint effort of 33 organisations.

The campaign will have action, awareness generation and advocacy on Bhumi Suposhan. In the initial phase of the Abhiyan, various programmeslike felicitating farmers practicing nonchemical means of farming, awareness generation on replenishing the lands, initiating Bhumi Suposhan on the fields of the willing farmers, encouraging segregation of degradable waste and converting it into compost in housing societies in cities, etc., are planned. There will be seminars, workshops, debates, and farmer’s field schools too.

A dedicated office to coordinate Jan Abhiyan is set up in New Delhi. The campaign will be guided by a Margadarshak Mandal and Abhiyan will be led by a steering committee consisting of farmers successfully practicing Bhartiya Krishi Paddhatii.e., non chemicalfarming.