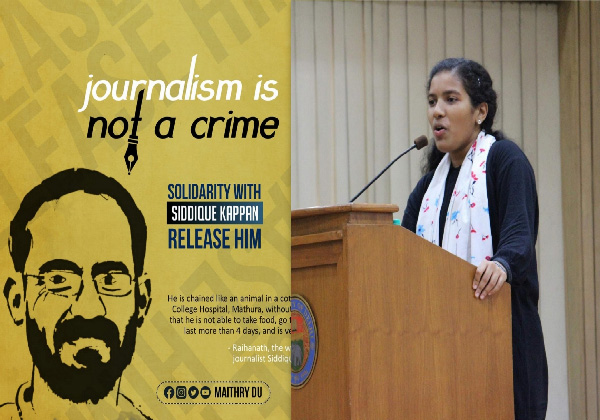 The Vice-President of ‘Maithry’ Kerala Forum, which is a group of Malayalee students in Delhi University, resigned from the post citing the forum’s support to anti-national forces. The forum had recently come out in support of Siddique Kappan who is charged under UAPA and is currently lodged in UP jail. Krishnendu, a third-year BA (Hons) Political Science student s at the Bharati College, New Delhi in her resignation letter accused the forum of getting hijacked by the Muslim Student Front, Students Islamic Organisation and Campus Front of India.

Islamists had been using such cultural groupings to propagate their anti-national agenda in various Central Universities of India. Krishnendhu, an elected representative of the forum had protested against various decisions taken by the forum, which were against the national interest.

Islamists penetrating to the mainstream in Kerala has become a matter of great concern. Recently, even the Chief Minister of Kerala had written a letter to the UP CM Yogi Adithyanath requesting him to provide treatment to Siddique Kappan, who was arrested by the UP police for triggering communal violence following the Hathras incident.

In her letter, Krishnendu said that her resignation was a strong protest against the stance taken by the alliance (SIO, MSF, CFI) in favour of individuals engaged in anti-national activities.

Read Krishnendu’s resignation letter:
To,
The Cabinet,
Maitri (Delhi University)
I have been the Vice President of the Cabinet of Maitri organisation (Delhi University) for the last two years. As far as my understanding, until now, Maitri is a nuetral organisation working without any political intention. But I have learned that this is not the case with Maitri. By claiming to be neutral, this student body pursues a particular political ideology in many ways to unfold it’s plan. Maitri is being used for the political interests of some groups.
Today, Maitri caters and contributes to the religious interests and communal politics of the Campus Front of India (CFI), the Students Islamic Organization (SIO) and the Muslim Students Federation (MSF).

Today, however, Maitri declared its solidarity for Siddique Kappan, who has been arrested by the police in violation of the IPC Section 12,4 A (treason) and Section 153 A (on inciting enmity between communities) in connection with the Hathras rape issue. Siddique Kappan has been charged under Section 295 A (provoking religious sentiment).
If all this is being done on humanitarian grounds then why is Maitri as an organisation selectively intervening only in some issues and not in others in many other parts of India? Why did the alliance not respond when the Indian soldiers were attacked by terrorists and Maoists? ,

Maitri also played a role in the anti-CAA protests and demonstrations. There has always been an opportunity for an open discussion among students and Maitri supporters on the subject. Instead of doing that, the organization has taken a side, why should a ‘neutral’ organization only intervene in certain matters with partiality ?

Whenever the Maitri Cabinet has tried to intervene in any of the above ways, I have always opposed it. But i had always failed in the face of a majority of cabinet members. I have remained silent on many issues for fear of isolation and targetting, and many students outside the cabinet have had similar experiences. Even today, they suffer from various mental problems due to it.

I resign as Vice President of Maitri because I have not used this organization for my political benefits in any way and I am fully convinced that I have not demanded any kind of political solidarity but as an impartial organization. I can in no way identify with the above political interventions. This resignation is a strong protest against the stance taken by the alliance in favor of individuals engaged in anti-national activities.