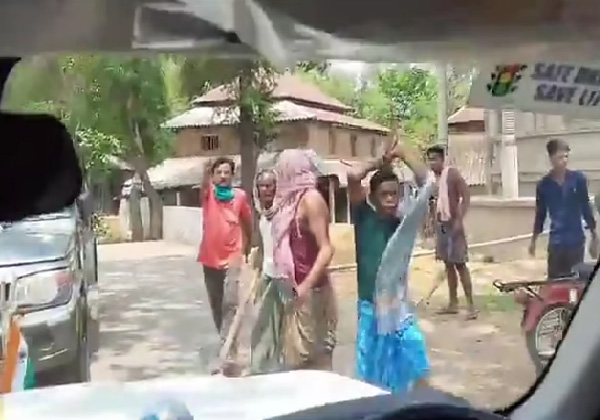 In another case of an attack on Bhartiya Janata Party member following the declaration of assembly elections in West Bengal, the convoy of Minister of State for External Affairs V Muraleedharan was attached in West Bengal.

The Union Minister and BJP leader shared a video on his official Twitter account which showed a number of people surrounding his vehicle with sticks in their hands. They can be seen attacking the vehicles in the convoy of the BJP leader.

Muraleedharan alleged the role of TMC in the attack and stated that the goons broke windows and even attacked his personal staff.

In the video one can see alleged TMC goons attacking the hood of the car using a long branch while a worried local associate can be heard urging the driver to quickly turn the car around. At that moment, a large stone was thrown by one of the attackers thereby shattering the rear window. A large branch was then thrown which landed on the back seat of the car.

The attack happened despite the presence of police pilot car. One of the members of the attacked car can be heard urging the driver to ensure the pilot car remains behind them, purportedly to try and ensure some protection from the attackers. The pilot car can be seen attempting an overtake, before the video abruptly ended.

Earlier today, the Union Home Ministry has constituted a four-member team to find facts and look into reasons for the post-election violence that has emerged in West Bengal in the last few days. Images and videos of scores of BJP workers and voters being harassed by TMC goons has been circulating in social media in recent times.

Prime Minister Narendra Modi had apparently expressed anguish over the law and order situation in the state to West Bengal governor Jagdeep Dhankar. The saffron party’s national president JP Nadda also toured the state in the last two days and met with the families of the deceased BJP workers.

The BJP state media cell has alleged that attacks are continuing members of the party. The BJP has claimed that 22-years-old Balaram Majhi from Ketugram, BJP Kisan Morcha Mandal President of Jambani Mandal, Kishore Mandi and Arup Ruidas have been killed by alleged TMC goons. Ruidas was reportedly hanged to death.

The BJP has also alleged that the house of BJP candidate from Jadavpur Rinku Naskar was attacked by alleged TMC goons.