In the last few days, many have been protesting against the draft regulations and changes proposed in administration of Lakshadweep Islands, and have been posting on social media with the hashtag #SaveLakshadweep. 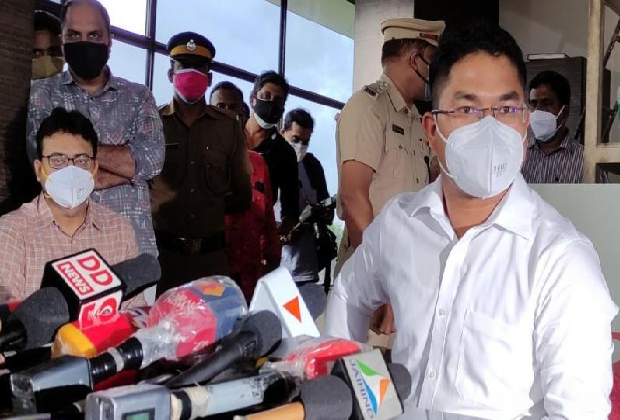 KOCHI: The proposed new rules in Lakshadweep are aimed at the betterment of the islanders and a misinformation campaign is being unleashed by some vested interests to portray the administration in poor light, S Asker Ali, the Collector of the Union Territory said here.

Defending the controversial regulations of the Union Territory’s administration, the Collector said that what is being witnessed is a ‘misleading campaign’. “The present campaign that is going on, is totally misleading and is led by those outside of Lakshadweep. There is no tension on the Islands. It is also not representing the sentiments of the people. The administration is proactively considering the larger public interest,” the Collector said.

Talking about the widely criticised proposal to bring change in panchayat regulation that proposes to not allow people with more than two children to participate in the election, the Collector stated that the move ‘will empower proper family planning and that it will empower women in the Islands”. Meanwhile, he clarified that the rule will not apply to people who already have more than two children. “Only parents of such children born after the date of implementation of the regulation will be barred from contesting,” said Ali.

Another contentious reform is the draft Lakshadweep Prevention of Anti-Social Activities Regulation 2021. While there are questions as to why such a law should be implemented in a place which is famous for some of the lowest crime rates in the country, the Collector stated that such a law is being implemented considering the ‘future’ of Lakshadweep. Answering questions of reporters on the need for such a regulation, the Collector stated that recently 300 kg heroin and five AK 47 rifles were confiscated by the Indian Coast Guard from a fishing boat that was passing through the sea, “along one of the Islands”. But it should be noted that the confiscated boat, according to the Indian Coast Guard (ICG), is allegedly from Sri Lanka and the fishermen on board were also Sri Lankan nationals and the ICG had made no mention about any Lakshadweep connection in their statement to media.

When this was pointed out, the Collector said, “It is a foreign boat that happened to be in and around Minicoy Island. Till now, Lakshadweep is a peaceful place. But in the next 10 years, the situation may worsen, considering emerging conditions. We cannot take a chance.”

Implicitly referring to drug-related cases, he mentioned that in the last two years, there have been 40 of them. “It is also not just about the cases, it is about the sense of insecurity about youth. Anything can happen anytime, we need to prepare. We cannot assume in 20 years, Lakshadweep will remain peaceful. The objectives of the administration are also changing,” Ali said.

Interestingly, on being asked about the move to ban beef in the islands through the draft law in the name of ‘animal preservation’ which will ban slaughter, transportation, and selling or buying beef products, Collector Asker Ali refrained from using even using the term ‘beef’. “That is a policy decision. What is easily available on Lakshadweep are fish items. We have not taken away non-veg from the mid-day meals in schools and are providing fish and egg items. This is because it is easily available during the present lockdown period,” he said. He added that many states in the country have implemented cow protection laws. “Only those with illegal businesses are starting propaganda [against cow protection laws].”

On the alleged move to allow alcohol distribution in the Lakshadweep Islands, Collector stated that it will be only available in selected hotels and will strictly be only for tourists.

One of the other contentious draft proposals is the Lakshadweep Development Authority Act which aims to widen roads, map and earmark areas for construction, mining, commercial or residential activity, among other things. It also allows for authorities to evict anyone on the selected land. People have been up in arms about this, given that Lakshadweep is an ecologically sensitive zone. They are also opposing road widening proposals as Lakshadweep doesn’t have many vehicles, and those there are mostly two-wheelers. However, Collector Ali justified the proposed regulations as part of bringing ‘development’ to the islands. “Even after 73 years of independence, development is low in Lakshadweep, even internet facilities are inadequate; while Maldives, an island country, is a tourist hub. We aim to develop Lakhsadweep likewise,” he added.

The Collector also defended the COVID-19 management by the Lakshadweep administration. “There have been so far only 26 deaths and out of these, 23 were patients with serious comorbidities,” he said. Notably, in the first wave of the pandemic last year, Lakshadweep Islands had zero COVID-19 cases, which experts credited to strict quarantine measures and testing. However, these measures were relaxed after Praful Patel took over and it was in January this year that Lakshadweep recorded its first COVID-19 patient.

Meanwhile, members of various political parties, including Youth Congress, CPI, staged a protest and tried to block the Collector as he came to the Ernakulam Press Club.