Sister Lucy dismissed from the Church after Vatican rejects her appeal, had extended support to nun in Franco Mulakkal case

Sister Lucy Kalapura has been ordered by the Franciscan Clarist Congregation Superior General in Ernakulam to vacate the convent within one week. 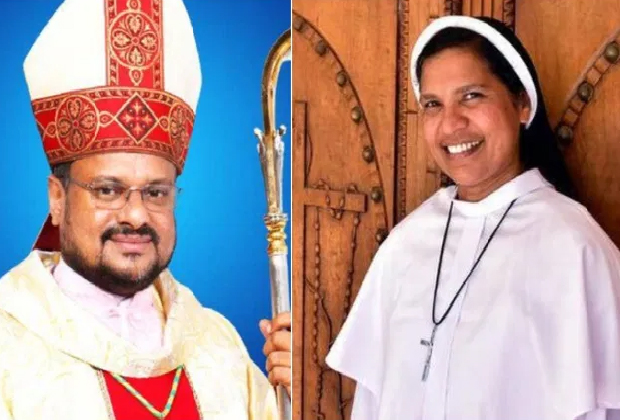 Sister Lucy Kalapura, one of the five nuns who stood in support of the nun who accused Bishop Franco Mulakkal in a rape case, has been permanently expelled from the Church. This move comes after after the Apostolica Signatura, the highest judicial authority in the Catholic Church, rejected her appeal against her congregation’s decision to strip her of sisterhood.

A letter from the Franciscan Clarist Congregation, dated 12 June, reads that ‘the appeal of Lucy Kalapura is rejected by Apostolica Signatura and the dismissal is confirmed’. With this move by the Vatican, Sister Lucy Kalapura has been dismissed from the Church with finality.

Sister Lucy Kalapura has been ordered by the Franciscan Clarist Congregation Superior General in Ernakulam to vacate the convent within one week.

Sister Lucy expressed her dismay at the inequitable decision taken by the Vatican, “Shocked at her dismissal, she said, “I don’t know what is happening. I am going to tell the truth to the world. The Vatican did not even conduct a trial in my case. I will stay here in the Convent. I don’t know how this is happening.”

She is said to have refused to leave the convent in Wayanad, Kerala, where she is currently living.

Meanwhile, Republic quoted Adv A M Sodder, Association of Concerned Catholics, as saying: “Is this what Christianity is all about? The superior general is rejoicing at Sr Lucy’s dismissal. Better if such people are not nuns forget about being Superior Generals.”

Adv Sodder went on to say that it is a “sad day” for the Catholic Church in India, and he questioned as to “why has the Vatican letter not been written in the language a person understands and that too reaching after a year from its issue?”

How Sister Lucy became a target of smear campaign

It’s worth noting that the Church has waged a smear campaign against Sister Lucy since she supported the protest against rape suspect Bishop Franco Mulakkal. Sister Lucy was expelled from the Franciscan Clarist Congregation (FCC) in August 2019 on grounds of indiscipline and failure to provide a satisfactory explanation for her lifestyle ‘in violation of rules’

A few days later, Sister Lucy filed a complaint to the Vellamunda police in Kerala against a convent in Karakkamala at Mananthavady in Wayanad district. She had accused the convent of illegal confinement.

Sister Lucy in her complaint had said she was not able to attend the holy mass in a nearby church because of the illegal confinement. She found that the gates of the convent locked from outside on Monday after which she called the police, who helped unlock the gates.

The convent later forced her to withdraw two cases she had filed against it and tender an unconditional apology if she wanted to continue living there.

In January last year, the 52-year-old nun accused the authorities of denying food but she said she will remain at Franciscan Clarist Congregation’s convent even if she was starved to death. Sister Kalapura had said last year, that the harassment against her had increased after her autobiography in which she recounted sexual abuses and aberrations prevalent in convents, was released in December last year. The nun, who belongs to the order of Franciscan Clarist Congregation in Kerala, was hounded for raising her voice against rape-accused Bishop Franco Mulakkal, had narrated her life experiences and spoke about sexual abuse and harassment of nuns in the book titled ‘Karthaavinte Naamathil (In The Name of The Lord)’

Speaking about the harassment meted out at her, Sister Lucy had then expressed hope that the highest head of the Catholic Church, Pope Francis, would respond favourably to her appeal to the Vatican questioning her dismissal. The Vatican, however, has rejected her appeal and has dismissed her from the Church permanently, shattering her hopes.