Padam forest is now synonymous with the radical organization Popular Front of India (PFI). This has again raised questions on the intentions of PFI who often claims to be a social service organization. 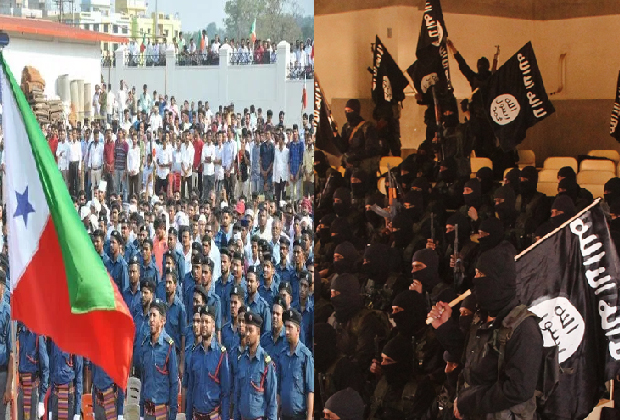 After the recent recovery of explosive substances like gelatin sticks, wires etc from the Padam forest area in Kerala, the spotlight has again been shifted to this remote area which has been in news for all the wrong reasons. Padam forest is now synonymous with the radical organization Popular Front of India (PFI). This has again raised questions on the intentions of PFI who often claims to be a social service organization.

Consider this, 4000 wooden sticks used for martial practice by PFI cadres were recovered on February 15 by forest officials; just two days prior to PFI’s unity march in Kerala. In 2013, a similar recovery of wooden sticks along with explosives and Jihadi literature had happened from the PFI training camp at Narath, Kerala. The case was investigated by National Investigation Agency.

The story doesn’t end here. Padam forest land is often used as a safe haven by PFI. An officer involved in the Narath case revealed that apart from training, PFI uses the Padam forest area to dismantle vehicles that are used by its Hit Squads members during an attack, murder or review of their opponents. His revelation assumes significance with the recent discovery of dismantled bike parts including petrol tank, engine parts, headlight etc after a search was carried out again in the Padam forest area in the aftermath of the discovery of explosive substances a couple of days ago. More than 15 sambar deer carcasses had been recovered from the Padam region in the last 6 months itself!

An Investigation officer related to the case said that this could be part of PFI’s offensive training to gain mastery in group attacks. Police also found traces of blood belonging to Rahul, a BJP sympathizer from the Padam forest route. PFI was suspected to be behind the disappearance of Rahul. The story didn’t end here, there was more to come. In 2019, a PFI hit squad member named Ashik was electrocuted by an illegal fence made by locals in the Padam forest area while trying to evade police. Of all the routes, Ashik chose the forest route of Padam. All these incidents clearly point that the Padam forest area has become a safe haven for PFI.

One forest officer associated with the Padam forest area on the condition of anonymity said that in the last year, more than 10 incidents came to light in which PFI cadre threatened forest officials who attempted to enter the Padam forest area on routine work. To keep track of the movement of Police and forest officials, PFI had strategically settled families of their cadres on forest fringes with a promise for title deeds of encroached lands in return for loyalty and in the process, getting dominance over the area. Serious lapses on part of Kerala forest officers are yet to be answered who delayed deployment of forest fire watchers till 15th February while other forest areas were allotted fire watchers in the first week of January itself.

Padam forest is now synonymous with the radical organization Popular Front of India (PFI). This has again raised questions on the intentions of PFI who often claims to be a social service organization.