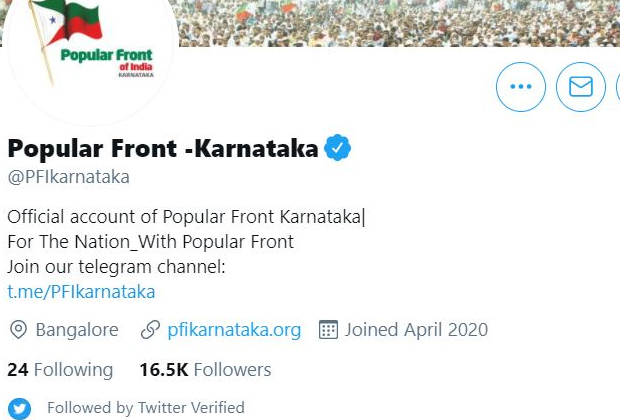 New Delhi : Social media platform Twitter has verified the Twitter account of Popular Front of India (PFI) Karnataka an organization that is currently under the watch of the intelligence agencies in India for their reported links with global terrorist organizations.

In February this year, UP ATS has unearthed a shocking truth in their investigations that Bangladesh-based terror outfit Jamaat-ul-Mujahideen helped the two members of Popular Front of India (PFI), arrested in Lucknow, in arranging explosives and firearms to carry out terror activities in UP and other parts of the country.

In a 2010 dossier on Popular Front of India (PFI), the Intelligence Bureau has stated that PFI is a Confederation of Islamic organizations which were collaborating with the banned Islamic terrorist organization Student Islamic Movement of India (SIMI). It also stated that it was spreading its reach in Kerala, Delhi, Manipur, Goa, Rajasthan, UP, Bengal, Karnataka, and West Bengal.

In 2017, calls for a ban on PFI got fresh impetus after the National Investigation Agency (NIA) submitted to the home ministry a comprehensive dossier that listed the Islamic group’s links with terror-related cases that the agency had investigated. The NIA dossier said the PFI was the second avatar of the National Development Front which was formed in 1993 after subsequent riots.

With each passing day, Twitter is exposing its alignment with anti-social elements in India.